WASHINGTON (CNN) -- A California food processing plant is voluntarily recalling up to 1 million pounds of roasted pistachio products that may have been contaminated with salmonella, the Food and Drug Administration announced Monday. 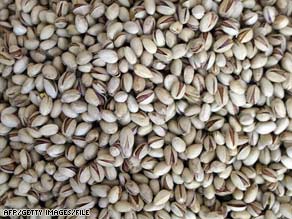 Salmonella strains were found last week during routine test by Kraft Foods, one company that purchased the nuts.

The nuts came from Setton Farms in Terra Bella, California, about 75 miles south of Fresno. They were largely distributed in 2,000-pound containers to food wholesalers who would then package them for resale or incorporate them as ingredients in other products, such as ice cream and trail mix.

No illnesses have been linked to this case, said Dr. David Acheson, FDA's associate commissioner. But salmonella strains were found last week during routine test by Kraft Foods, one of about three dozen companies that purchase pistachios from Setton Farms, he said. Kraft notified the FDA on March 24.

Setton Farms did not immediately respond to CNN requests for comment.

Acheson emphasized that unlike the recent case of salmonella-tainted peanut butter, this recall was not prompted by an sickness outbreak, saying the decision was a "proactive" move. He said the FDA has received two recent complaints, from the East and West coasts, from people who say they became ill after eating pistachio products, but a link to Setton Farms has not been confirmed, he said.

The FDA is advising consumers not to eat any pistachio products, but not to throw them out, either, because additional recalls are likely and having products that could be turned in would allow for easier tracing of contamination. The agency is setting up a Web site to update the public.

Dr. Jeff Farrar, head of the California health department's food and drug division, said it's likely that the roasted pistachios will be found in a wide variety of products. He noted that Setton Farms is the second-largest pistachio processor in the nation.

Raw pistachios are roasted to a temperature that should kill salmonella, Acheson said. Because the roasted products tested positive for salmonella suggest cross-contamination with raw products.

Acheson added that the Setton Farms recall is related to the one announced Friday by Kroger, a grocery store chain with stores in 31 states. Kroger recalled Private Selection shelled pistachios from its retail stores because of possible salmonella contamination.

Kroger, in a statement Friday, said no illnesses have been reported in connection with the product.

In February, Kroger was among retailers that recalled peanut products tied to the Peanut Corporation of America, a Virginia-based company accused by the FDA of knowingly selling peanut butter and peanut paste that was contaminated with salmonella.

PCA's peanut processing plant in Blakely, Georgia, is being investigated in connection with a salmonella outbreak that has sickened more than 500 people and has been linked to eight deaths.

All About California • Food and Drug Administration