A 28-year-old man from Michigan decided to donate a kidney to a total stranger, setting into motion a kidney swap that over many months has resulted in 10 people getting a donor organ--and the process is still ongoing. 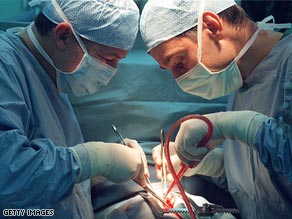 Advances in surgery have made kidney transplants easier, experts say.

It's the longest series of such transplants to date, although such "kidney chain" transplants are becoming increasingly common because of better computer programs for matching donors, according to a report published Wednesday in the New England Journal of Medicine.

"It is becoming more common, but it's still not something that's happening every day," said Dr. Robert A. Montgomery of Johns Hopkins University in Baltimore, Maryland, where four of the 10 transplants were performed. "It's still really only being organized by a few places." Health.com: The real gift of life -- How medical donations help

Some people who need a kidney have a relative or friend who's willing to donate, but sometimes the two aren't a good match. That's where a "paired donation" comes in. In its simplest form, this incompatible pair is hooked up with a similar pair, so that the recipient in the second pair is compatible with the donor in the first pair. There have been procedures involving organ exchanges among three or more such pairs, but these are typically done simultaneously--a major logistical and surgical challenge--to avoid the possibility of a donor backing out at the last minute. Visit CNNHealth.com, your connection to better living

So-called "domino transplants," initiated by altruistic donors willing to donate to anyone who's a match, may sidestep this problem because they won't leave a recipient high and dry if someone farther down the chain decides not to donate. In theory, this means the transplant swaps don't have to be done simultaneously. Health.com: Tackling everyday life with arthritis

And, as this week's report shows, the theory works. The process, known as a "nonsimultaneous, altruistic, extended donor" (NEAD) chain, was coordinated by two paired-donation registries and took place over eight months at six transplant centers in five different states. Five transplants involved simultaneous organ exchanges. In five other cases, donors had to wait until an appropriate recipient was identified; the longest stretch between transplants was five months.

Dr. Michael A. Rees, of the University of Toledo Medical Center in Ohio, and his colleagues report that they used computer programs called optimization models to sift through hundreds of mismatched donor-recipient pairs to create long chains of matches; the more people in such databases, the better the chance for a match.

Montgomery and his colleagues estimate that paired kidney donations, altruistic and otherwise, have the potential to allow for 1,500 more transplants from live donors per year. Health.com: I was too busy for heart disease until it almost killed me

"It definitely has the potential to help a lot of people," says Elizabeth Sleeman, a policy analyst at UNOS. The organization is developing a national paired-donor registry, Sleeman said, which is expected to be up and running by 2010. Paired donation has definitely been gathering steam in recent years, she added: "Just the way the math works out makes it a lot easier to find a compatible donor, and it certainly can be a lot quicker than waiting on the deceased donor list."

M. Utku Unver, an economist at Boston College who helped develop the optimization model used in the transplant series and is a co-author of the New England Journal of Medicine report, said reports on these transplant chains have led more people to come forward who are willing to donate to a stranger. "I think that people realized that in the past one person could help only one person, but now one person can initiate the chain and this chain can help potentially many, many people."

Right now it's tough to get statistics on just how many NEAD-chain donations have taken place, because there are three regional registries of paired donors but no national system. Creating such a system would be a key step to realizing the potential of the technique, Montgomery said.

"What we would really like to see, at least the folks at Hopkins, would be to have this done at a national level in a much more thoughtful, organized, rational way," he says. "But until then we'll continue to do what we're doing, which is to try to get as many people transplanted as possible."

All About Kidney Failure