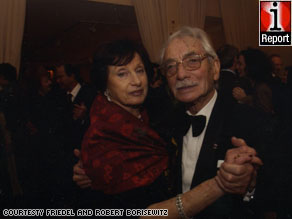 Friedel later survived severe tuberculosis, and while both have experienced personal tragedy during their long lives, they have refused to be crushed by it.

What is most remarkable is that at the age of 92 and 97 respectively, Friedel and Robert are as dynamic and full of life as people 30 years their junior.

Friedel especially is, according to her friends, a "miracle" of nature. When she reveals her age -- which she almost never does -- people are often shocked.

In her day Friedel was a striking beauty, and that glamour and grace is still evident today.

See more photos of the couple »

Since the age of 13 Friedel says she has exercised every day. She plays golf regularly and often spends weekends in the picturesque seaside town of Knokke, off the coast of Belgium. She swims regularly in waters that many of her compatriots find too cold to enter.

Her interest in healthy living started early in life. "Until the age of 13, I was a little ball, slightly round, and my piano teacher told me I should exercise.

"Since then, I have always been very active" said Friedel, who never misses her daily a.m. work-out television show.

Except for one lapse, Friedel has always maintained healthy eating habits.

"When we arrived in Brazil we ate too much as there had been very little food during the escape. Jewish food is also not particularly healthy.

"That slightly destroyed my stomach and I have since cooked very healthily -- many fruits and vegetables and very little fat."

Nevertheless, when it comes to food, Friedel says her husband, who she married in 1941 in Brazil, is not as disciplined.

"He has always been constantly hungry; he loves eating and drinking a lot," Friedel told CNN. But with Friedel in charge of the cooking, Robert has had little choice but to eat healthy ingredients.

In the last year, Robert's concentration and memory have deteriorated, but Friedel says she notices a difference when Robert has been active.

"I can see his mind works better when he has been outside the four walls of our apartment and going for walks, even if he now walks very slowly."

Today, Friedel is more determined than ever to continue her healthy lifestyle.

"You will never hear me say I've had enough, even if I do feel tired at times," she told CNN. "My father thought it was a sin to give up. Now I would like to live for as long as is possible."

Friedel admits she sometimes thinks about death: "I just wonder how it will happen. It's like being pregnant with your first child -- you wonder how it's going to happen.

"The difference is that when you are pregnant for the first time, people give you advice and tell you how it's going to be."

But Friedel, who speaks six languages fluently, doesn't dwell on the subject. She prefers to concentrate on the present.

"When I was ill with tuberculosis at the age of 38 and in hospital for almost a year, my doctor told me it was a good lesson in wisdom to have experienced illness. It means I will always yearn to make up for lost time."