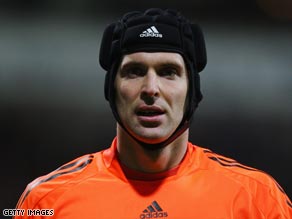 Chelsea goalkeeper Peter Cech has to wear a head guard after fracturing his skull in a match in 2006.

A number of scientific studies have suggested that repeatedly heading a football could increase the risk of developing dementia in later life.

In 2002, former England international footballer Jeff Astle died aged 59. A coroner said that Astle died from a degenerative brain disease likely to have been caused by "repeated small traumas to the brain" related to heading a heavy leather football.

The coroner ruled Astle's death to be the result of "an industrial disease" -- in other words a hazard of the job.

Dr Andrew Rutherford is a psychologist at Keele University in England, who has researched the neuropsychological consequences of football. He says that while the coroner's verdict in the Astle case may have reflected the findings of certain scientific studies, his own review of the data found that most of these studies were flawed.

Rutherford told CNN there is no persuasive evidence in scientific literature that heading a football causes cumulative long-term brain injury, but he says there are other risks involved in soccer.

"What has often been indicated in these studies is that people who head a lot compete to head the ball, and in those circumstances they may clash heads and get elbows to the head, which can cause concussion," he told CNN.

"The ball is rarely involved in acute concussion -- if it is, it's when the ball hits someone in the head when they're not expecting it," he told CNN. "When you're expecting contact you tend to contract your neck muscles, which absorbs the force."

In 2007, Delaney carried out a study on footballers aged between 12 and 17 that showed they were half as likely to be concussed wearing headgear than without.

He said youngsters have a higher risk of head injury than adults because their skulls are thinner and less able to absorb shock. To make matters worse, their neck muscles aren't as well developed and they often lack the correct heading technique that can help dissipate the force of the ball.

While headgear can protect footballers from being concussed during a match, no one knows the long-term effects of repeated "sub-concussive" blows to the head.

Delaney says that while there is indirect evidence that a career in soccer can lead to dementia, no one has yet found a definitive link between the two. He says definitively proving a link would mean monitoring hundreds of footballers for three or four decades -- and that would take a lot of funding.

Rutherford also acknowledges the need to look into the long-term effects of playing football and he is currently trying to get funding from the Wellcome Trust to investigate if former professional footballers in their 60s and 70s show a higher incidence of dementia than their peers.