10 'secrets' you shouldn't keep from your doctor

(CNN) -- Do you remember the scene in the movie "Something's Gotta Give" where Jack Nicholson's character lies about Viagra to a doctor in the emergency room? 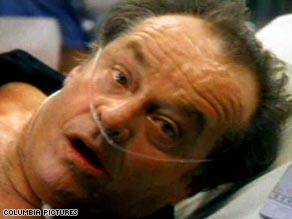 Jack Nicholson in "Something's Gotta Give" denies having taken Viagra -- a move that could've killed him.

He'd just had a heart attack after romancing a (much younger) woman, and the doctor is furiously calling out orders to give him aspirin, blood pressure drugs, and ... nitroglycerine.

"Mr. Sanborn, did you take any Viagra today?" the doctor asks as the nurses load him up with the medicines.

"Okay, good. Just need to be sure. Because I put nitroglycerin into your drip. And if you'd taken Viagra, the combination could be fatal," the doctor warns.

Cut to Nicholson, who rips the IV out of his arm.

Hollywood got it right: It can be deadly to lie to your doctor. Your doctor "must know everything about you, even if the discussion feels a bit uncomfortable," says Dr. Bernard Kaminetsky, the medical director of MDVIP, a group of boutique medicine doctors with headquarters in Boca Raton, Florida. "What you omit may be the key to a diagnosis."

Dr. Vicki Rackner says patients lie to their doctors for a variety of different reasons. Sometimes they don't want to talk about intimate subjects -- she calls them "the three P's: peeing, pooping, and procreating." Other times they want to seem like the ideal patient, one who eats right and exercises and follows the doctor's orders 100 percent. "I think it's a drive to be seen as a good patient. We all want to be seen as good boys and girls," says Rackner, a general surgeon from Mercer Island, Washington, who writes and speaks about patient empowerment issues.

Watch more on what to tell your doctor »

From finances to sex, bathroom habits to spousal relationships, herbs to illicit drugs, here are 10 things about which you should always be open with your doctor.

Don't hide from your doctor the fact that you:

No one's proud of any of the above, but your doctor needs to know. He can't accurately diagnose and treat your health problems if you hide your substance abuse. "Remember, there are strict privacy laws between patient and doctor, so the information is not going to be shared," Kaminetsky says.

2. Have peeing or pooping issues

"I once had a patient who literally died of embarrassment," Rackner says. "She had blood in her stool, but she was too embarrassed to tell her doctor. A year later she was in terrible abdominal pain, and did go see her doctor. It was colon cancer, and it had spread to other parts of her body." The patient came to see Rackner, but it was too late to do surgery. She died six months later.

"As children, we're taught 'Don't talk about poop. That's potty talk.' So on some level we don't like to talk about these things," Rackner says. "But if she'd brought up the blood in her stool to her doctor, [the cancer] would probably have been at an early stage and she could have been cured."

You might feel like your doctor looks down on herbs and other forms of alternative medicine, and there's a good chance you're right; many M.D.'s are dismissive of alternative medicine. But even if you fear seeing your doctor's eyes roll back in her head, tell her about the supplements you're taking. Certain herbs don't mix well with certain medications, so she needs to know.

4. See a chiropractor or an alternative healer

See above about the eye-roll you might get if you tell your doctor you're seeing a chiropractor. But if you're having neck pain, it would help your doctor to know that just a few days ago your chiropractor adjusted your neck.

5. Are having financial troubles

"Money is the ultimate taboo," Rackner says. "We have no idea how to talk about money." But talk about it we must, she says. For example, if your doctor recommends a procedure you can't afford, just say so. You might be able to work something out with the doctor. "Patients can offer to set up payment plans for expensive procedures and pay over time rather than a lump sum," says Dr. Lisa Forbess, assistant professor of cardiology at the University of Texas Southwestern Medical School in Dallas, Texas.

If you want a cheaper medicine than the one your doctor prescribes, don't be embarrassed to say so. Rackner says for $4 you can buy a list of the generic drugs. Ask your doctor if something on the list could work as well as the one he's suggesting.

7. Feel depressed or anxious or stressed out

Along with money, many people have trouble talking about their feelings. "Depression is a serious disease and a lot of patients hesitate to tell their physician because because they think it's embarrassing, or the problem will go away by itself," Kaminetsky says. "Depression is too dangerous to keep a secret."

When your gynecologist asks if you are doing your breast exams every month, don't lie and nod your head. Admit that you're not. Perhaps she'll come up with a way to make it easier to remember. Same goes for medicines: If you're bad about taking the drugs your doctor prescribed, she needs to know. This isn't school; you won't be punished.

If cupcakes are your best friend and you haven't exercised since the last century, just admit it. Perhaps together you and your doctor can come up with ways to develop better habits.

10. Have a small problem you think is unimportant

One of Kaminetsky's patients hesitated to tell him that he was experiencing subtle and occasional difficulty in swallowing. "The patient thought it was so minor and inconsequential that he didn't want to waste the doctor's time mentioning it," Kaminetsky says. But in the end, the patient did mention his symptoms and Kaminetsky says he was able to diagnose early -- and curable -- esophageal cancer.

So how do you get the guts to admit these things to your doctor? "You can just say to the doctor, 'Hey, this is embarrassing for me to talk about. This is hard for me. This is a taboo topic,' " Rackner suggests.

Another option: Tell the nurse, if you feel like you connect with her better.

A third idea: "If your doctor does e-mail, try that, or just write a note," says Rackner. "Some people do better writing things than saying them."

All About Exercise and Fitness • Colon Cancer • Viagra