SARASOTA, Florida (CNN) -- On a recent afternoon, Pamela Rinchich quietly recalled how her cancer doctor abruptly canceled an appointment. Rinchich owed $268 from a previous visit: She didn't have the money and the doctor refused to see her until she paid. 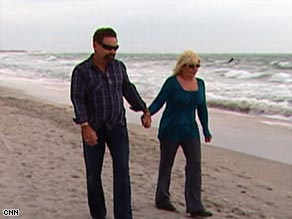 Pamela Rinchich, with husband Jim, was diagnosed with cancer shortly after being laid off.

"I offered to do whatever I could, even work in the office to cover it," said Rinchich, with tears in her eyes.

Just a few months earlier, life was going great for Rinchich. She was planning a wedding with her fiancé, Jim, and she had a good job as a supervisor at the Honeywell plant in Sarasota, Florida.

In February 2008, she said, management called all the employees into the break room. "We were told that our plant was closing," she said.

The jobs were moving to Mexico. One hundred twenty-five people were laid off. Rinchich, who had worked at the plant for more than 20 years, picked up her last paycheck just days before her wedding in March.

She was upset but optimistic. She had a plan. She had been taking classes to be a dental assistant. She didn't think she was going to have a problem finding a job. "The economy wasn't as bad then."

Then, in late May, Rinchich found a lump in her breast. A mammogram confirmed the bad news: She had Stage 2 breast cancer. In early June, she underwent a full mastectomy and began chemotherapy.

Rinchich is far from alone. She is one of the millions of people President Obama said he wants to help with his ambitious plan to reform health care. Meet another family caught in the squeeze

On Thursday, Obama unveiled details of the federal budget for the next 10 years. Among other things, the budget calls for the creation of a $634 billion health care reserve fund. Among the fund's goals are universal health care coverage and reducing growth in insurance premiums.

Watch more on how Pamela Rinchich is coping »

The president's budget was unveiled just as the number of Americans who have lost their jobs -- and their employer-paid health insurance -- is growing.

According to the U.S. Department of Labor, payroll employment has declined by 3.6 million since the start of the recession in December 2007. In the last three months alone, more than 1.7 million jobs have evaporated.

Experts say it's hard to tell exactly how many people have no health insurance, but they have a rough idea. "We are expecting about half the people who lost their jobs also lost their health insurance," said John Shield, senior vice president of the Lewin Group, a health-care policy research and management consulting firm.

She said her organization saw between an increase of between 6 and 10 percent in the number of calls in December 2008 compared with December 2007. Many of the calls, she said, come from people who have lost their health insurance because they also lost their job.

Rinchich did have a bit of a safety net. She was eligible for COBRA, which allows employees who leave a company to be covered under the company's health care plan for a year and a half. But the $368 she has to pay each month cuts deeply into her $900 monthly unemployment check.

Rinchich's story is not unique. A study released earlier this month by Families USA found the average national premium costs for family COBRA coverage consume 84 percent of average unemployment benefits. For individuals it's about 30 percent.

"We need to get a grip on the issue," said Kathleen Stoll, deputy executive director of Families USA. She is optimistic that the provision in Obama's stimulus plan will help ease some of the strain.

Under the new plan, she said, the federal government will pick up 65 percent of the cost of COBRA premiums. "It's great. It's going to help a lot of folks," said Stoll, but she also said it has some limitations. Among other things, to be eligible, you must have lost your job after August 31, 2008.

Unfortunately, the Obama COBRA plan won't help Rinchich since she lost her job at the beginning of 2008. She's not sure how much longer she will be able to pay for COBRA and is working with a cancer nonprofit to see if she can get help.

So far, she owes close to $20,000. She cashed out her pension to pay her car note, mortgage and utility bills. "But that's all gone now," she said.

When she is feeling up to it, Rinchich looks for work as a dental assistant. She's now cancer free, but has more surgeries ahead. "I just try to keep a positive attitude," she said, as she tries to figure out the next step.