How to germ-proof your home, without going overboard

MARIETTA, Georgia (CNN) -- Jake Austin, 10 months old, loves playing on the ground. On a typical February morning, Jake and his 4-year-old brother, Hank, are rolling around on the family's shiny hardwood floor, the same floor where they and their parents track in dirt from outside every day. 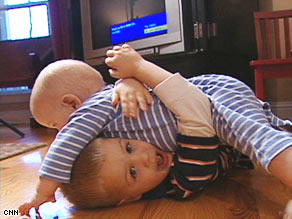 Hank Austin, bottom, and his brother, Jake, play together on the floor. What about germs?

The boys' parents, Laura, 28, and Clint, 36, worry that they and their children are constantly getting exposed to bacteria around the house.

"The thing that concerns me most is the baby crawling on the floor," Laura Austin said. "He licks the floor, so there is no telling what he is picking up."

CNN used the Austin house, in a suburb of Atlanta, Georgia, as a test case to see just how germy a four-person family home might be. Microbiologist Zehava Eichenbaum, associate professor at Georgia State University, came armed with swabs to test the hot spots for a variety of bacteria.

As it turns out, Eichenbaum did not find anything to be too concerned about in the Austin home. There were bacteria almost everywhere, but they were mostly the benign kind found in a normal environment. While most of these microorganisms are commonly found in or on our body, some that were found on the Austins' floor can produce disease -- such as shigella, staphylococcus pneumonia, or staphylococcus aureus -- if they are inhaled, ingested or touch skin breaks, Eichenbaum said. Still, nobody has gotten sick.

She offered tips on maintaining a healthy home, while not overdoing it. Having some bacteria is actually a good thing, experts say.

Normally, the most bacteria-filled place in a home is the kitchen sink, Eichenbaum said. Think about all the dirt and uneaten food that winds up in it. The sink is even less clean than the toilet seat. Learn how to safely navigate a public restroom

You can put bleach in it, but bacteria will still accumulate. The best solution: Don't let food you eat raw, such as fruits and vegetables, touch the sink surface before you eat them. And if you let utensils or vegetables hang around in the sink, rinse them before use.

Watch for more on germs in the home »

Watch more on the "Germ House" this weekend on House Call.
7:30 a.m. ET Saturday and Sunday

Sponges are also a hot spot for bacteria and should be washed frequently, Eichenbaum said. You can put them in the dishwasher, or get them wet and microwave for 30 seconds.

The Austins were already one step ahead -- Laura Austin uses dish cloths and microwaves them to disinfect them instead of reusing sponges.

How often should you wash your sheets? They may look clean, but you sweat on them every night and rub your skin against them, shedding bacteria in the process. Laura Austin changes the sheets for her sons once a week, but once every other week for the bedroom she shares with Clint. Eichenbaum said a normal family should probably change sheets once a week.

Also, it's a good idea to wipe doorknobs with some frequency. In addition, try not to put your purse on the floor too much, she said.

As for the laundry, if you have a newborn, wash the baby's clothes separately from the other clothes. Visit CNNhealth.com, your connection to better living

It may seem like common sense, but the most important intervention is washing your hands, Eichenbaum said.

MRSA, staphylococcus, and E. coli are just some of the bacteria that may be lurking in your home. If you're worried about a specific area, Eichenbaum says, use a disinfectant with bleach.

But be aware that there is such a thing as too clean. Overuse of antibacterial products may lead the microbes to develop mutations that make them resistant to disinfectants and multiply to create a resistant population. This is also how antibiotic resistance works -- for instance, taking only a partial dose of antibiotics causes resistant bacteria to evolve, which makes illnesses harder to treat.

"You don't need to wash yourself with bacterial soap, because you might lose microbes that are beneficial to you," Eichenbaum said.

Some scientists point to the hygiene hypothesis, which posits that Americans have become more allergic and asthmatic in recent years because they clean too much.

So a baby like Jake should crawl on the floor as he pleases. It's how he "samples the world," she said.