The life and death of an Empowered Patient

(CNN) -- Gilles Frydman wasn't ready to see his friend Dr. Doreen Kossove in her condition: tethered to an oxygen tank, hardly able to speak, living with only one lung, her tiny, frail body ravaged by cancer and barely visible under her blankets. 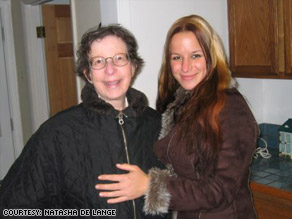 But as he approached the hospital bed in her tiny Berkeley, California, apartment, he saw that she was typing furiously on a laptop computer.

Kossove, he learned, didn't let cancer -- in her lungs, chest and brain, and on her spinal cord and her vocal cord nerves -- get in the way of helping others.

"[I have] about 2,000 rare-cancer patients under my gimlet stare," Kossove wrote about the patients she communicated with on the Association of Cancer Online Resources, a Web site Frydman founded. "I have had three deaths and another person dying in the last month among the people whom I advise. The last two current ones are breaking my heart."

Many of these patients say Kossove is the reason they're alive today. A Brooklyn, New York-born pediatrician who practiced in the United States and South Africa, she was found to have leiomyosarcoma, a rare and aggressive cancer, in 2001. She corresponded online with her fellow patients nearly every day -- sometimes all day -- until she died February 6. She was 65.

"I owe her my life," cancer patient Erica Gero wrote in tribute to Kossove on the ACOR Web site. Gero explained that Kossove convinced her to see a doctor who specialized in sarcomas, a move Gero said got her the treatment she needed. "Doreen gritted her teeth and would not let go of me until I went to the right kind of doctor. She was polite, but snarky at the same time. And of course, she was right." Read more tributes to Kossove

"She was the most powerful patient advocate I've ever known," Frydman added.

"The world is missing a hero," wrote Chaim Kurz, whose wife, Adina, for eight years has been battling synovial sarcoma, a rare type of soft tissue cancer. Kurz writes under the alias 'Bruce Katz.'

"I remember at one time there was a question as to whether the tumors had spread into my wife's spinal cord or brain. We had nowhere to turn. Doreen was herself starting a new chemotherapy treatment and was extremely tired, but sent me a three-page e-mail explaining in detail what options we had," Kurz wrote on the ACOR site. "She never candy-coated anything, but we knew that she loved everybody who ever asked her a question."

With a mother-hen style, Kossove pushed the cancer patients under her "gimlet stare" to hire the right doctor, fire the wrong doctor and find the latest treatments, which can be very difficult for rare cancers. She urged them to question doctors who told them there were no options left; she'd been told the same thing when her cancer was first diagnosed. "When she joined the ACOR list in 2001, she was told she had one month to live," Frydman remembers.

"Her ability to be up on the latest research and to impart the knowledge was uncanny," wrote Susan Lowenbraun, nursing director of the Sarcoma Center at Cedars-Sinai Cancer Center in Los Angeles, California, who worked with Kossove to help patients on the ACOR site. "Even when she felt ill herself, she did research and communicated tirelessly with other patients."

Sometimes Kossove showed impatience for others in her leiomyosarcoma group. If she felt someone wasn't moving quickly enough to fight LMS, which can spread at lightning speed, she let them know in very blunt terms. "I get very exasperated, very bitter and very worried about the people on this list," she wrote to one woman. "[Some of them] put their heads in the sand. ... If one has high-grade LMS, one has to hit the road running."

Kurz paid tribute to her forcefulness on the ACOR site. "If she was in the U.S. Army or Navy, there would be peace in the world now -- that is how strong she was," he wrote.

But she also showed great compassion, inspiring others on ACOR to keep searching for the newest treatment. "Together we are more, and more effective, than we are separately," she often told her fellow cancer patients. Signing off on one message, she wrote, "Celebrate being alive. Warmly, Doreen."