Anger, stress may be linked to heart problems

(CNN) -- When you get angry, the stress isn't restricted to your head. New research shows that anger actually triggers electrical changes in the heart, which can predict future arrhythmias in some patients. 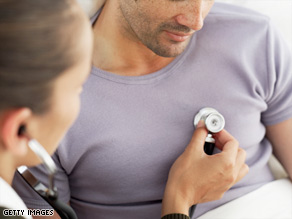 Anger management may be key for patients with heart problems, researchers say.

The study, published in the March 3 issue of the Journal of the American College of Cardiology, may demonstrate a link between mental stress and sudden cardiac arrest, which causes more than 400,000 deaths every year.

Arrhythmias, which are heart rhythm problems, happen because of a malfunction in the electrical impulses in your heart that coordinate heart beats, according to the Mayo Clinic. The result is that your heart beats too fast, too slow or irregularly.

Some arrhythmias may increase a person's risk of stroke or congestive heart problems.

"Perhaps if we treat them with something like stress management or anger management, we may decrease the likelihood of arrhythmias," she said.

Previous research has shown that the rate of sudden cardiac death increases when the population is collectively stressed, such as during an earthquake or war, Lampert said.

Other studies have also shown that if you ask patients about what happened before a heart attack, they'll most frequently say they were angry, said Dr. Charles Raison, psychiatrist and director of the Mind/Body Institute at Emory University in Atlanta, Georgia.

"It is just indisputable that negative emotionality -- especially anger and misery, depression -- are terrible for your heart," he said.

The patients were asked to describe a time in the previous couple weeks when they felt angry or aggravated, and were prompted with questions to describe the moment vividly. Researchers looked at the heart's electrical stability through a measure called T-wave alternans.

"Overall in the group, when we did the anger recall protocol, the group as a whole showed an increase in electrical instability," Lampert said.

Researchers then compared the top 25 percent of people -- those who showed the most instability -- with the others in the group and found that the the ones with the highest instability in the lab were 10 times more likely to experience an arrhythmia sometime in the next three years.

The idea could be used as a predictive test for people who are unable to take an exercise-induced electrical stability test, Lampert said.

More study is needed to see how the mental stress test relates to traditional exercise testing, said Dr. Eric Rashba, professor of medicine at Stony Brook University Medical Center in Stony Brook, New York. Rashba was not involved in the study. The new test may be useful in combination with the exercise test, he said.

While this is an early study with a small sample size, it is the first time this type of anger or emotional stress testing has been shown to correlate with future arrhythmias, he said.

Exercise elevates heart rate much more than mental stress does, meaning the effects of mental stress on the heart may be caused by adrenaline impacting the heart cells, the study authors said.

In a follow-up study, Lampert and colleagues are taking patients with implantable defibrillators and giving them stress management therapy to see if the likelihood of arrhythmias decreases.

Within the behavioral approach, one strategy is to help people understand the reasons behind their anger, including the anger that they had in childhood, which may carry over to adulthood. After going through this therapy, people have a better sense of what happened to them in their lives and stop associating everything with upsetting events from the past.

"They stop looking at the present constantly through the eyeglasses of the past, and when that happens, the things in the present don't anger them that much," he said.

Another strategy involves exploring ways to more constructively deal with anger. The Mayo Clinic offers these anger management tips, which include taking a "time out," working with the person who made you angry, forgiving others and keeping an anger log to identify circumstances that make you angry.

Meditating and exercise are other ways to reduce anger, Raison said.

Still, more work needs to be done to demonstrate an underlying causal relation between heart problems and anger, or, alternatively, if there is a third factor that causes both -- for example, inflammation plays roles in both cardiac disease and anger, he said.

All About Heart Attacks • Stress