'Natural' weight-loss supplements may be a health hazard

The names of the weight-loss supplements say it all: 7 Day Herbal Slim, 2 Day Diet, and even 24 Hours Diet. Those are just three of dozens of different brands touted as all-natural ways to shed pounds, and lose them super fast. 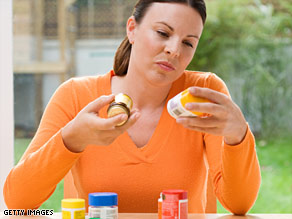 The FDA found that at least 69 so-called natural weight loss supplements are tainted with medication.

But according to the U.S. Food and Drug Administration, nothing could be further from the truth. Many of these "herbal" weight-loss remedies -- 69 at last count -- are tainted with prescription drugs or mixtures of drugs, including laxatives, diuretics, and anti-seizure medications. And that list of 69 products will probably grow in the coming weeks, says FDA spokesperson Rita Chappelle.

"Our investigation is ongoing and quite extensive, and more products will be added to the list," she says.

"The biggest issue generally speaking with herbal over-the-counter supplements is that people don't think they're drugs to begin with," says Matthew Grissinger, director of error reporting programs at the Institute for Safe Medication Practices, in Horsham, Pennsylvania. Undeclared ingredients make it even more likely that a person could have interactions with prescription medications or other health risks, he says.

Someone with high blood pressure or heart failure (not uncommon in the overweight) "may already be on diuretics, so now they are literally taking two, three, four times the amount of diuretic they are supposed to," he says. Health.com: How this mother of three lost over 70 pounds

More than 150 million people in the U.S. take vitamins and other dietary supplements, according to the Council for Responsible Nutrition (CRN), which represents supplement manufacturers. The group supports the FDA's efforts and encourages "consumers to be savvy when it comes to their supplements," said CRN's president and CEO, Steve Mister, in a statement. "Always buy from reputable companies that you know and trust."

The FDA does not approve or regulate dietary supplements before they come on the market; "let the buyer beware" is typically the rule of thumb.

Watch: Elizabeth Cohen reported on this problem in December 2008 »

Many of the tainted weight-loss supplements are manufactured in China and sold on the Internet, says Chappelle. However, that's not true of all of them. One popular weight-loss product, called StarCaps, "was sold in GNC, advertised in People magazine, and promoted by people like Kathie Lee Gifford and others," says Chappelle. "That product contained an active pharmaceutical ingredient that was, again, not declared, called bumetanide -- a diuretic."

The FDA recently asked all the manufacturers of these supplements to recall their products, but only three have done so as of this week, says Chappelle. StarCaps has been recalled, as have two other products, called Venom HyperDrive 3.0 and Zhen de Shou. Health.com: America's top 10 healthiest fast food restaurants

So far, no deaths have been linked to the tainted supplements. But people who take the weight-loss products could experience heart palpitations, a drop in blood pressure, or seizures, says Chappelle.

"We're still seeking voluntary recalls, but our main message is to make consumers aware that these products are out there," she says. "If a product seems too good to be true, it typically is." The Internet "has become a huge playground" for fly-by-night companies selling potentially hazardous products, she says.

The FDA recommends that people who want to lose weight discuss their goals with their doctor and take only an FDA-approved weight-loss drug if such treatment is deemed necessary. There are three FDA-approved drugs on the market: sibutramine (Meridia), orlistat (Xenical), and a low-dose version of orlistat that is sold over the counter (Alli).

The FDA also recommends checking its list all of the tainted weight-loss supplements, which will be updated.

Sidney Wolfe, M.D., director of the Health Research Group at the consumer advocacy group Public Citizen, notes that weight-loss products have a dismal history in terms of safety and efficacy. For example, the prescription combination known as Fen-Phen was linked to heart valve problems and removed from the market in 1997, and phenylpropanolamine (PPA) was an ingredient removed from weight-loss products in 2005 due to stroke risk. (Public Citizen has also petitioned the FDA to remove sibutramine and orlistat from the market.)

"There isn't any magic solution to losing weight. The only way you can lose weight in a sustainable way is to cut down on your dietary intake by 200 or 300 calories a day and exercise 100 to 200 calories more," he says. "None of this other stuff works." Health.com: Get your family involved in changing your eating behavior

It's not just weight-loss supplements. In the past, other dietary supplements have been found to be tainted with prescription remedies, including diabetes drugs, Viagra, and other medications.

"The FDA can barely keep up with all the stuff that's going on here," says Wolfe. "It's not exactly easy for them to detect it."