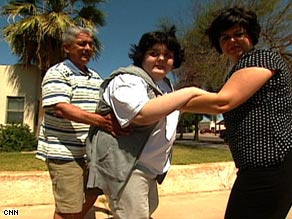 The ruling came from a panel of "special masters" who began hearing three test cases in 2007 involving children with autism -- a disorder that their parents contend was triggered by the vaccine against measles, mumps and rubella combined with vaccines containing thimerosal, a mercury-based preservative.

Three families -- the Cedillos, the Hazlehursts and the Snyders -- sought compensation from the Vaccine Injury Compensation Program, but the panel ruled that they had not presented sufficient evidence to prove that the childhood vaccines caused autism in their children.

In a statement shortly after the release of the decisions, the U.S. Department of Health and Human Services said it continues to support research "to better understand the cause of autistic disorders and develop more effective methods of treatment." Paging Dr. Gupta blog: What the ruling tells us

"The causes of autism remain poorly understood. ... We will continue to support authoritative research that addresses unanswered questions about whether certain subgroups of individuals with particular underlying medical or genetic conditions may be more vulnerable to adverse effects of vaccines," the Autism Speaks statement reads, in part.

The Autism Society of America, one of the oldest and largest autism grassroots organization in the country, also called for more research into autism's causes.

"ASA believes that the science of autism causes and treatments need to be more vigorously researched. ... Individuals living with autism need help today, and this case illustrates the need for the medical community to probe further into environmental causes of autism. Like all families affected by autism, these families deserve to be heard and supported in their journey raising their children."

All About Autism • Vaccines • Autism Speaks