A 42-year-old HIV patient with leukemia appears to have no detectable HIV in his blood and no symptoms after a stem cell transplant from a donor carrying a gene mutation that confers natural resistance to the virus that causes AIDS, according to a report published Wednesday in the New England Journal of Medicine. 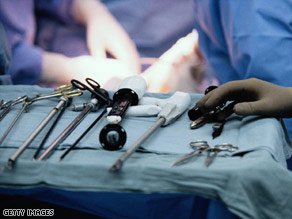 The patient underwent a stem cell transplant and since, has not tested positive for HIV in his blood.

"The patient is fine," said Dr. Gero Hutter of Charite Universitatsmedizin Berlin in Germany. "Today, two years after his transplantation, he is still without any signs of HIV disease and without antiretroviral medication."

The case was first reported in November, and the new report is the first official publication of the case in a medical journal. Hutter and a team of medical professionals performed the stem cell transplant on the patient, an American living in Germany, to treat the man's leukemia, not the HIV itself.

However, the team deliberately chose a compatible donor who has a naturally occurring gene mutation that confers resistance to HIV. The mutation cripples a receptor known as CCR5, which is normally found on the surface of T cells, the type of immune system cells attacked by HIV.

The mutation is known as CCR5 delta32 and is found in 1 percent to 3 percent of white populations of European descent.

HIV uses the CCR5 as a co-receptor (in addition to CD4 receptors) to latch on to and ultimately destroy immune system cells. Since the virus can't gain a foothold on cells that lack CCR5, people who have the mutation have natural protection. (There are other, less common HIV strains that use different co-receptors.)

People who inherit one copy of CCR5 delta32 take longer to get sick or develop AIDS if infected with HIV. People with two copies (one from each parent) may not become infected at all. The stem cell donor had two copies.

While promising, the treatment is unlikely to help the vast majority of people infected with HIV, said Dr. Jay Levy, a professor at the University of California San Francisco, who wrote an editorial accompanying the study. A stem cell transplant is too extreme and too dangerous to be used as a routine treatment, he said.

"About a third of the people die [during such transplants], so it's just too much of a risk," Levy said. To perform a stem cell transplant, doctors intentionally destroy a patient's immune system, leaving the patient vulnerable to infection, and then reintroduce a donor's stem cells (which are from either bone marrow or blood) in an effort to establish a new, healthy immune system.

Levy also said it's unlikely that the transplant truly cured the patient in this study. HIV can infect many other types of cells and may be hiding out in the patient's body to resurface at a later time, he said.

"This type of virus can infect macrophages (another type of white blood cell that expresses CCR5) and other cells, like the brain cells, and it could live a lifetime. But if it can't spread, you never see it-- but it's there and it could do some damage," he said. "It's not the kind of approach that you could say, 'I've cured you.' I've eliminated the virus from your body." Health.com: 10 questions to ask a new partner before having sex

Before undergoing the transplant, the patient was also found to be infected with low levels of a type of HIV known as X4, which does not use the CCR5 receptor to infect cells. So it would seem that this virus would still be able to grow and damage immune cells in his body. However, following the transplant, signs of leukemia and HIV were absent.

"There is no really conclusive explanation why we didn't observe any rebound of HIV," Hutter said. "This finding is very surprising."

Hutter noted that one year ago, the patient had a relapse of leukemia and a second transplant from the same donor. The patient experienced complications from the procedure, including temporary liver problems and kidney failure, but they were not unusual and may occur in HIV-negative patients, he said.

Researchers including Hutter agree that the technique should not be used to treat HIV alone. "Some people may say, 'I want to do it,'" said Levy. A more logical -- and potentially safer -- approach would be to develop some type of CCR5-disabling gene therapy or treatment that could be directly injected into the body, said Levy.

Less invasive options to alter CCR5 could be on the horizon within the next five years, said Levy. "It's definitely the wave of the future," he said. "As we continue to follow this one patient, we will learn a lot."

One drug that's currently on the market that blocks CCR5 is called maraviroc (Selzentry). It was first approved in 2007 and is used in combination with other antiretroviral drugs. Health.com: Who's most at risk for STDs?

In 2007, an estimated 2 million people died from AIDS, and 2.7 million people contracted HIV. More than 15 million women are infected worldwide. HIV/AIDS can be transmitted through sexual intercourse, sharing needles, pregnancy, breast-feeding, and/or blood transfusions with an infected person. Health.com:What should I do if the condom breaks?