(CNN) -- When Julian Asher listens to an orchestra, he doesn't just hear music; he also sees it. The sounds of a violin make him see a rich burgundy color, shiny and fluid like a red wine, while a cello's music flows like honey in a golden yellow hue. 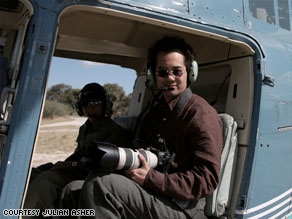 Asher, a researcher in the department of genomic medicine at Imperial College London, has a rare condition called synesthesia, a neurological condition in which people experience a mixing of their senses. People with the condition may see colors and movement in numbers, words or sounds.

As many as 1 percent of people have the most recognizable form of synesthesia, studies say. Acclaimed Russian-American author Vladimir Nabokov, who wrote "Lolita," famously had the disorder, as did physicist Richard Feynman and composer Franz Liszt.

"Since a subtle interaction exists between sound and shape, I see q as browner than k, while s is not the light blue of c, but a curious mixture of azure and mother-of-pearl," Nabokov wrote in his memoir "Speak, Memory."

Psychologists have known for more than a century that synesthesia runs in families -- Nabokov's mother and son Dimitri also displayed forms of it -- but the specific genes have not been found.

Now, Asher and colleagues in the United Kingdom have done what they say is the first genetic analysis of synesthesia. Their findings are published this week in the American Journal of Human Genetics.

Researchers collected DNA from 196 people from 43 families in which there were multiple members with synesthesia. They looked exclusively at auditory-visual synesthesia, the kind where sound triggers color, which is easier to diagnose than other possible forms. Visit CNNhealth.com, your connection for better living

They expected to find a single gene responsible for synesthesia, but they found that the condition was linked to regions on chromosomes 2, 5, 6, and 12 -- four distinct areas instead of one.

"It means that the genetics of synesthesia are much more complex than we thought," Asher said.

Brain scans have shown that people with synesthesia seem to have "cross-wiring" between brain regions, said Dr. V.S. Ramachandran, director of the Center for Brain and Cognition at the University of California, San Diego.

"Nobody really had the evidence pinning it down to specific genes in specific chromosomes, and I'm delighted to hear somebody's done that," Ramachandran said.

"Cross-wiring" was shown in a study led by J.A. Nunn at Goldsmiths College, London, which found that the visual areas of the brain were activated in response to sound in people for whom sound triggers color.

Given that a normal infant's brain has excess connections between brain regions, one hypothesis is that synesthesia results when the genes that "prune" these connections away are mutated, Ramachandran said. In other words, people with synesthesia may have brain connections that would normally disappear at an early age.

Genes found in the areas of Asher's study have been connected to other mental disorders. For example, genes on chromosome 2 have also been linked to autism, Asher said.

The link between synesthesia and autism is controversial and speculative, but one of Asher's previous case studies suggests a connection. The man he examined had Asperger's syndrome -- a mild, high-functioning form of autism -- and also had an extraordinary memory capacity for numbers. In fact, he memorized 22,000 digits of the number pi.

The man's process of remembering these numbers is not simple rote recall. Instead, it is as though he were navigating a landscape, Asher said. "He says it's like walking along a path," Asher said.

The man's ability to focus intently on a dry subject is associated with Asperger's, but it's also synesthesia that helps him memorize numbers, Asher said. In fact, in this sense, synesthesia is a form of photographic memory.

One suggestion is that synesthesia and autism in a single person may make him or her a savant, someone with a singular and extreme intellectual ability.

Children with synesthesia will often show signs of it in school, because it slows down reading for some kids and makes lectures difficult to absorb for others. As awareness of learning differences grows in schools, more children are coming forward and explaining that they have trouble, leading to more diagnoses, Asher said. Interventions may include written notes or books on tape for those whose synesthesia interferes with, respectively, listening or reading.

To what extent do children with synesthesia grow up to become artists and poets? The connection is controversial, in spite of prominent examples such as Nabokov, Asher said it's a misconception that most synesthetes go into creative disciplines. His database of 900 people with the condition does not have a disproportionate number in artistic professions.

In Asher's own case, nonverbal noises such as a fire alarm or a piece of music will trigger visual sensations.

When he was a child, Asher would go to the symphony with his parents and assumed that the lights went down so that everyone could see the colors better. "I mean, why else would they do it?" he said.

"My parents asked something, and I said, 'Oh, they turned the lights off so you could see the colors,' and they had no idea what I was talking about, and that's when I realized that they didn't see what I saw," he said.

He never knew that his condition had a name until he happened to be researching the genetics of perfect pitch, which has been anecdotally linked with synesthesia.

"Even to this day, I'll run into people who study neuroscience for a living, and they've never heard of it," he said. There are organizations that promote awareness, but still a lot of people don't know about it, he said.