CNN -- Years ago, a frustrated boy with a violent temper attacked his own mother with a hammer (his older brother restrained him). He stabbed a schoolmate over a dispute about which radio station to listen to; the knife blade luckily hit a belt buckle. 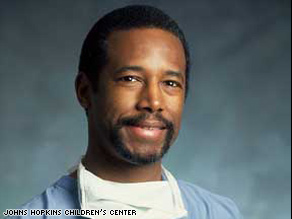 Carson wants to continue educational efforts and find ways to reform the health care system when he retires.

That brash teen today is a world-renowned neurosurgeon and the director of pediatric neurosurgery at Johns Hopkins Children's Center.

Dr. Benjamin S. Carson made medical history in 1987 by performing the first successful surgery that separated twins conjoined at the back of the head. He also became known for his expertise in pediatric brain tumors and methods of controlling seizures. In 2008, he received the Presidential Medal of Freedom, this country's highest civilian honor.

Having come up from the streets of Detroit, Michigan, to receiving an award at the White House, Carson, 56, works to spread his gospel of education and hard work to motivate others.

He and his wife, Candy, started a scholarship foundation to help children with strong academics and humanitarian qualities to pay for college.

"I have at least 100,000 letters from kids and adults from around the world ... telling me how it changed their lives," Carson said. Their tales of transformations and redemption inspire him to keep talking about educational empowerment and overcoming adversity, he said.

An obstacle is a hurdle, and "you jump over it," Carson said. "Every time you see a hurdle, you jump over it, and it strengthens you for the next one. And if that's the case, you lead a victorious life, because whatever comes before you, you know you're going to get around it."

Carson was raised in Detroit, majored in psychology at Yale University and attended medical school at the University of Michigan, where he studied neurosurgery.

"I think he's an angel, a gift from God," Gooding said. "He has touched a lot of people's lives."

Carson holds more than 50 honorary doctorates and hundreds of other awards. He's fortunate, he acknowledges, but this doctor does not believe in luck.

"I always say you make your own luck by being prepared," he said.

His mom pushed him hard.

She turned off the TV, sent Carson and his brother to the library and made them write weekly book reports. Meanwhile, she worked several jobs to support her two sons. She is now 80 and lives with Carson in Baltimore, Maryland.

When Carson was young, he was influenced by stories about Booker T. Washington, a former slave who taught himself to read and later advised presidents, and the biblical character Joseph, who persevered though his brothers sold him into slavery.

"Those kinds of stories had an impact on me and helped me to believe it's not where you started, it's where you end that counts. And you have a whole lot to do with that," he said.

"Everybody has problems. They just come in different forms. If that problem for you becomes a containing fence, then you become a victim. Once you think you're a victim, you are one, and you're not going anywhere."

In the same way, Carson's biography has resonated with people like 22-year-old Douglas Nivens II of Baltimore, Maryland.

Nivens' mother was killed when he was 4 years old, and his father was imprisoned for her murder. His aunt raised him, and he endured relentless teasing for his interest in academics while attending public schools in Baltimore City. During middle school, Nivens picked up Carson's autobiography, "Gifted Hands," and immediately identified with it.

"It was a relief to see someone grew up in the city and didn't have a luxurious life but overcame it all," he said. "I love stories about underdogs, those who overcome adversity and do something."

When he was in middle school, Nivens won two $1,000 scholarships from the Carson Scholars Fund, which helps children with strong academics pay for college.

"When it came to times of doubt during high school, when I talked to my adviser, they would say, 'You got this award. Not everyone gets it. You're not dumb. You have the tools to be successful in life,' " Nivens said. "That's what really helped me in terms of self-esteem and management in high school."

He graduated with honors from the University of Maryland, Baltimore County in May.

"I probably should not be where I am," said Nivens, a budget analyst for the U.S. Social Security Administration. "I went to Baltimore public schools. My father's in jail; my mother is dead. Statistically, I should not be here. I should be on parole somewhere or even dead. I never looked at it that way. I made it through."

"My message is that the person who has the most to do with what happens to you is you," Carson said. "Not somebody else, and not the environment. If you have a normal brain, you're capable of incredible things."