Mother of octuplets has six other children

(CNN) -- The mother of a woman who gave birth on Monday to octuplets said her daughter already has six children at home and was undergoing fertility treatment. 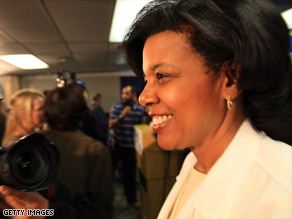 Dr. Karen Maples is part of the large team of doctors and nurses that helped deliver the octuplets.

The Los Angeles Times reported on Thursday that Angela Suleman said her daughter had the embryos implanted last year, resulting in the eight births.

"They all happened to take," Suleman told the Times. "I looked at those babies. They are so tiny and so beautiful."

The woman declined to have the number of embryos reduced when she discovered she was carrying multiples, the Times reported. The six older siblings range from ages 7 to 2, according to the newspaper.

Suleman said she was concerned about her daughter's homecoming because her husband, a contract worker, is due to return to Iraq.

In the meantime, the mother, who remains unidentified, appealed for privacy while she recovers from giving birth, medical officials said Thursday.

In her written statement delivered by Dr. Karen Maples of the Kaiser Permanente Bellflower Medical Center in California, the woman who delivered eight babies in five minutes said she would soon make public the details of her "miraculous experience."

"We understand that you are all curious about the arrival of the octuplets, and we appreciate your respect for our family's privacy," she said.

"The babies continue to grow strong every day and make good progress. My family and I are ecstatic about all of their arrivals."

"Needless to say, the eighth was a surprise to us all, but a blessing as well," she added.

The six boys and two girls -- ranging in weight from 1 pound, 8 ounces to 3 pounds, 4 ounces -- are doing well following their Caesarean-section delivery at the Bellflower hospital, doctors said. They were born nine weeks premature.

Dr. Mandhir Gupta, a neonatalist, said all but one of the octuplets are now breathing on their own. That baby might be taken off breathing equipment Friday.

Caring for eight premature babies is a challenge. Duties are being shared by a large team of hospital nurses and doctors for the time being. Two nurses have been assigned to each child, and all the babies are receiving fluids, proteins and vitamins intravenously, Gupta said.

"We feed them. ... We change diapers. ... When they cry, we console them," Gupta said. "When the mom comes and touches the babies, you can definitely see their expression on their faces and body. They are very happy."

The babies, who are being referred to by letters of the alphabet, will remain in the hospital for at least seven more weeks.

Baby H made headlines for its surprise appearance during the delivery, which took months of preparation by a team of doctors, nurses and respiratory therapists.

Watch a report on babies' progress »

The mother will not be able to hold her babies for another week, Gupta said. They are still fragile, developing intestines, he said.

Doctors initially thought the mother was pregnant with seven fetuses. She was hospitalized seven weeks ago and ordered to bed rest.

During the seven weeks, a team of 46 physicians, nurses and other staff members prepared for the births. When they started the delivery Monday, they were in for a surprise.

"After the seventh baby was born, we were taking a sigh of relief," Maples said.

"It was a surprise of our life when we in fact discovered there was an eighth baby," she said. "We never had an assignment for baby H nurse or baby H doctor. We just had to go on the fly and figure out what to do."

"Baby G nurse stepped up. We handed off the baby to baby G nurse. She then delivered that last baby to the neonatologist of the baby F."

"It was all wonderful because of the teamwork and the training we did before," Maples said.