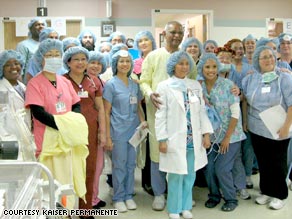 Members of the delivery team assigned to assist in the birth of the octuplets, just minutes before the delivery.