It's not just an old people thing: Arthritis myths debunked

(CNN) -- The bad economy and downturn in the housing market aren't the only painful things for Realtor Anne Stephens. Her knees, hips and ankles hurt from arthritis. 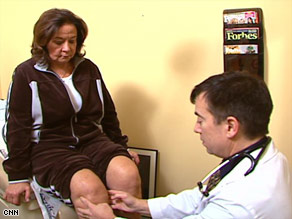 Anne Stephens, 61, was in her late 30s when she was diagnosed with osteoarthritis.

Stephens is among the 27 million Americans who suffer from the most common form of arthritis called osteoarthritis.

"I think people tend to think of this as more of a nuisance," said Dr. John Klippel, president and CEO of the Arthritis Foundation. "They think of it as only aches and pains and not the serious problem that it actually is -- the leading cause of disability in this country."

Klippel said part of the misconception has to do with all the myths surrounding the disease.

Common myth 1: Arthritis is a disease of the elderly

While older people do develop arthritis, children and teenagers can get certain forms of the condition, Klippel said.

The Arthritis Foundation reports two-thirds of people with doctor-diagnosed arthritis are under age 65.

Stephens was in her late 30s when she developed osteoarthritis after injuring her knees running and playing volleyball.

She felt a sharp pain and recalled, "It was downhill after that."

Researchers don't know the exact cause of arthritis, but they do know what puts people at risk.

Klippel said that while the disease is associated with aging, other risk factors include heredity, joint injury, obesity and lack of fitness.

Despite what your grandmother told you, experts say cracking your knuckles is not a risk factor for arthritis.

"It's annoying -- it's certainly not good for the joints, but on the other hand, it doesn't cause arthritis," Klippel said.

"Boy, there's a good myth," Klippel said with a chuckle. "I can't tell you how many patients I would take care of who would say they were better than the weatherman at predicting changes in humidity."

He said researchers have studied the claims, but concluded there is no scientific evidence to suggest arthritis flare-ups occur during bad weather.

Klippel also doesn't buy the argument that arthritis patients are better off if they live in a warmer climate.

"If you live in a warmer climate, you're simply more active for more months of the year and that's probably why people feel better," Klippel said. "It probably has very little to do with the weather itself."

Staying active actually is one of the most important ways to prevent and ease the pain of arthritis, Klippel said. It also helps with weight control.

"For people with arthritis, it hurts to exercise," he said. "But over time, the post-exercise pain actually diminishes if you push through it."

He recommended choosing joint-friendly exercises such as walking, biking or swimming.

In addition to putting ice on an aching joint, Klippel suggested taking nonsteroidal, anti-inflammatory medication before or after exercising to help relieve the pain.

"People need to stay active and move their joints to keep the muscles strong and to keep the joints flexible," Klippel said.

Klippel worries about arthritis patients who don't seek medical help because they don't think anything can be done about the pain.

He said a proper diagnosis can lead to a host of possible treatments, including the latest prescription medicines for pain and rehabilitating aching joints through physical therapy.

Klippel urges people not to wait until the pain is unbearable before seeing a doctor.

"If aches and pains persist for more than four weeks, that's a time to pay attention," he said.

Anne Stephens followed that advice and she said it has made all the difference. She manages the inflammation and pain by taking prescription medication (a nonsteroidal anti-inflammatory drug). She also exercises at least three days a week; the workouts help her strengthen her muscles. And she sees her doctor several times a year.

"I've learned to adapt," she said. "I know what's going to hurt me and what doesn't."