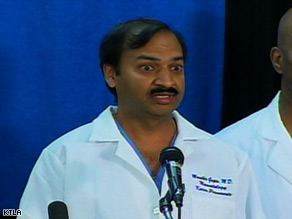 The first three to seven days will be critical for the infants, Dr. Mandhir Gupta said.