ATLANTA, Georgia (CNN) -- Health and Human Services' acting secretary has appointed Dr. Richard Besser as the interim director for the Centers for Disease Control and Prevention. 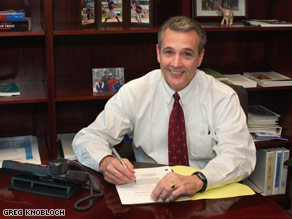 William Gimson will return to his position as the CDC's chief operating officer.

He replaces William Gimson, who took over as interim CDC director at noon on January 20.

Gimson replaced Dr. Julie Gerberding, who was the head of the CDC from 2002 until two days ago.

Gerberding, along with other senior officials, also resigned on January 20, when Barack Obama and his administration took over.

Past HHS secretary Michael Leavitt said that the interim directors would take over until the next HHS nominee -- former Sen. Tom Daschle -- is confirmed and makes the permanent appointments.

Gimson told employees he's returning to his post as the CDC's chief operating officer. The CDC usually has a physician as its director, which Gimson is not.

According to the biography posted on the CDC Web site, Besser's last position at the CDC was as the director of the Coordinating Office for Terrorism Preparedness and Emergency Response, where he was responsible for public health emergency preparedness and emergency response activities.

According to CDC sources, Besser was seeing patients when he learned of his new position. In addition to heading the CDC bioterrorism preparedness division, he is a practicing pediatrician.

All About Centers for Disease Control and Prevention • U.S Department of Health and Human Services