When presented with a juicy cheeseburger, cinnamon bun, or other tempting treat, women may have a tougher time reining in their desire to eat when they are on a diet than their equally hungry male counterparts. 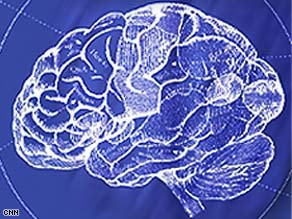 Men showed a distinctively different brain activity when they tried to suppress their urge for their favorite food.

In a new brain-scan study, researchers flashed tasty food in front of men and women who hadn't eaten anything in at least 17 hours. Both were told to fight their hunger, but only men showed a drop in activity in brain regions involved in emotion and motivation.

Men may have better tools for appetite control, which may help explain why women are more likely to be obese than men and have a tougher time dieting, according to the study published Monday in the journal Proceedings of the National Academy of Sciences.

"Something happens in the brains of men which does not happen in the brains of women. It's quite amazing," said Paul A. M. Smeets, of the Image Sciences Institute at the University Medical Center Utrecht, in the Netherlands.

"[The findings] suggest that in real life there might be a difference in how good men and women are at suppressing this kind of desire," said Smeets, who studies hunger and satiety using brain imaging, but was not involved with the current research.

Dr. Gene-Jack Wang, of Brookhaven National Laboratory in Upton, New York, and his colleagues used positron emission tomography, or PET scans, to observe brain activity in 23 normal-weight (or, at most, slightly overweight) people -- 13 women and 10 men. They asked the volunteers to choose their favorite food from a list that included fried chicken, lasagna, barbecued ribs, ice cream, or pizza.

Then, 17 to 19 hours after their last meal, the volunteers had a brain scan while they looked at one of their favorites. Study participants could smell the food as well as see it (the researchers warmed it up to waft fumes throughout the room), and also were given a taste with a cotton swab placed on their tongue.

Volunteers had three brain scans: once with no instruction on how to react to the food, once after being told to suppress their desire for the food, and once with no food in front of them. Health.com: Superfoods you need now

For women, brain activity was about the same whether or not they had been asked to suppress their desire. Men, on the other hand, showed a distinctively different brain activity when they tried to suppress their urge. They showed less activation in regions involved in "emotional regulation, conditioning, and motivation," the researchers note, specifically the amygdala, hippocampus, insula, orbitofrontal cortex and striatum.

The researchers didn't test to see if men truly were able to resist eating the food longer than women.

"We know that some people are very good -- they can watch the food, they don't eat -- but some people can't [be]," Wang said. He and his colleagues have shown a similarity between how people's brains respond to food and how they react to addictive substances such as cocaine and alcohol.

Men and women were the same in one respect, however. They were both likely to say they felt less hungry when they were trying to suppress their desire to eat.

This could have been because the women were simply embarrassed to admit they were still feeling hungry, says Marci Pelchat, a food scientist at Monell Chemical Senses Center, in Philadelphia, Pennsylvania, who was not involved in the research.

"In our society, being able to diet is seen as being somehow praiseworthy," she said. "And so failing at self-control might be something that people might not want to admit." Health.com: Best and worst advice from top diet plans

Evolution may have programmed women to eat food when they see it, Wang said. Women need to have a certain amount of body fat to get pregnant, have a healthy pregnancy, and nurse an infant, so the drive for most of our history would have been: "Whenever you see the food, you must eat. If you don't eat, you won't have food to eat anymore," he said.

In today's environment of all-you-can-eat buffets, he added, "This is a much tougher war to fight now." Health.com: Four tips to jump-start your January slim down

The findings may seem discouraging for women who are trying to lose weight. But they also offer some clues that may help them succeed, Pelchat said.

"If women have difficulty ignoring food cues, maybe a key to dieting for them is to minimize those cues or to minimize the association between those cues and eating. Don't leave food out on the counter, don't go by the Dunkin' Donuts," she said. "But also, another view is to practice ignoring the cues so that you break that automatic association, and that's a common behavior modification technique."

Mauricio Delgado, an assistant professor at Rutgers University in Newark, New Jersey, agreed. "It is possible that engaging in these different types of strategies that deal directly with the stimulus and emotion, rather than just suppression or ignoring, will have better long-term consequences in controlling appetite and food stimulation."

However, Delgado is also skeptical about using such a small study to make gender generalizations.

Before differences between men and women can be established in studies like this one, he said, several factors must be taken into account. Health.com: Surprising celebrity BMIs

For example, as Wang and his team point out, the study did not investigate where the women were in their menstrual cycle; the menstrual phase is known to influence how the brain responds to food.