(CNN) -- "Sometimes you can forget about the preciousness of life," hospital spokesman Allen Poston thumbed onto his Blackberry after peering into an operating room where a team of 15 doctors and medical staff separated conjoined twins in six hours in surgery. 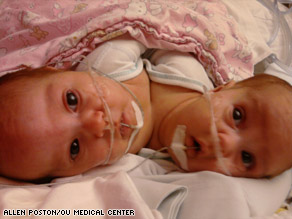 "I'm standing here in the operating room looking at the exposed beating heart of Preslee Wells," he wrote as he walked the halls at the Children's Hospital of Oklahoma University Medical Center.

On Monday afternoon, 2-month-old Preslee and her conjoined sister, Kylee, rolled onto their own backs for the first time, he said.

Poston, who updated friends and relatives on the surgery with constant posts from his hospital blog, snapped photos of each girl and showed them to friends and family who had been in the hospital waiting room since early Monday.

The news of the operation's success prompted a gush of emotion, breaking the silence that had once filled the room, Poston said.

After two months of waiting, the two girls were surgically separated.

"We waited because we wanted the organs to get a little bigger, a little stronger," Poston had told CNN over the phone earlier Monday. "The primary concern was cardiac connection."

After cardiac imaging, doctors determined there was "very little [cardiac] connection," but they remained concerned about a "liver bridge" connecting the twins.

That bridge, Poston said, posed the greatest operational risk because of its dual use by the twins.

Born October 25 in Oklahoma City, Oklahoma, to Stevie Stewart and Kylie Wells, the twins are being monitored in the hospital's neonatal intensive care unit. They are listed in critical condition.

"Today, they leave the OR in two different cribs, one following the other, still close in proximity, but might as well have been a mile apart," Poston wrote. "And that is exactly what everybody was hoping for."