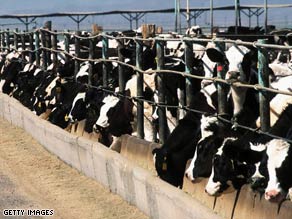 Under new rules, GE animals would not have to be labeled as such unless their physical makeup is altered.

"Genetic engineering is a cutting edge technology that holds substantial promise for improving the health and well being of people as well as animals," Randall Lutter, deputy commissioner for policy at the FDA, said in a statement.

"In this document, the agency has articulated a scientifically robust interpretation of statutory requirements. This guidance will help the FDA efficiently review applications for products from GE animals to ensure their safety and efficacy."

The FDA emphasized GE animals are not cloned, but instead have new characteristics or traits introduced into the organism through their DNA.

The new guidelines would require all GE animals to go through rigorous scientific testing before being sold on the market, according to Dr. Bernadette Dunham, director for the FDA's Center for Veterinary Medicine.

"We want the public to understand that food from GE animals will not enter the food supply unless FDA has determined that it is safe," she said.

Over 28,000 organizations and individual citizens commented on the possibility of genetically engineered animals entering the public's food system. Many people believe, ethically, that animals should not be altered.

Consumers will more than likely not see any changes in labeling of these animal products. Unless the physical makeup of the animal is altered, companies and producers will not be required to let consumers know their meat products come from a genetically engineered animal.

After the FDA's announcement, Consumers Union, the nonprofit publisher of Consumer Reports, issued a statement in which it said that by not requiring labeling on meat or fish from genetically engineered animals, the FDA blatantly ignored consumers' right to choose.

A recent Consumers Union poll found that 95 percent of consumers favor labeling of meat and milk from genetically engineered animals, which may contain genetic material from entirely different species, even humans.

"We hope the new Obama administration will reverse this ill-considered guidance and require labeling of genetically engineered meat and milk products as soon as possible after it takes office next week," said Jean Halloran, director of food policy initiatives at Consumers Union.

Producers have pushed for genetically engineered animals in an effort to produce livestock that are resistant to certain diseases.

All About Food and Drug Administration • Consumers Union of U.S. Inc.