(CNN) -- The day was supposed to be remembered as one filled with happiness. Their daughter, after all, had just turned 2 years old. Instead, Nikki Peterson remembers December 30, 2007 as the day her husband Billy got sick. 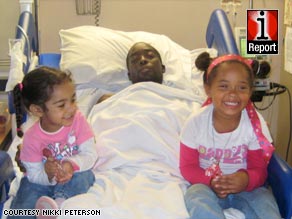 Billy Anderson's undiagnosed condition has kept him in the hospital for more than a year.

Billy Anderson was in fine health until that evening last winter. He woke up in pain and his wife rushed him to the emergency room. Over the next few days, he suffered a number of ailments, from a running fever and hives to swelling joints.

Nikki says she knew there was something wrong when Billy was no longer able to walk around the house. "This is a 6-foot, 240-pound guy who doesn't usually complain about anything," she says.

The couple, from Baxter Springs, Kansas, made three trips to the emergency room. On their third visit, Nikki refused to go home until doctors agreed to keep Billy in the hospital for further evaluation.

Since then, Billy, age 29, has been in and out of intensive care. He's spent time on a ventilator and suffered kidney failure. His body isn't absorbing nutrients, and as a result, his 240-pound frame has been whittled down by 100 pounds.

See photos of Billy and his family »

One year and a battery of tests later, doctors still haven't pinpointed the cause of his condition.

CNN's medical show "Vital Signs" recently asked viewers to tell their health stories on iReport.com. Nikki and her mom, Vicki Peterson, jumped at the opportunity. Tell your story with iReport.com

They hope their story will reach someone who can help solve Billy's unexplained illness. Doctors have gone through at least 40 possible diagnoses, according to Nikki.

"We've been told that this is 'Billy's Disease,' and that this will be written about in medical journals. We hope somebody has missed a test or overlooked something," she says.

Billy, a father of two who dreams of opening up his own restaurant one day, appears to have some type of problem with B-cells, according to Nikki. B-cells play a critical role in keeping the immune system healthy.

Dr. Jennifer Holter, who has been treating Billy at Oklahoma University Medical Center since the fall of 2008, says several immunologists have reviewed his case but the underlying reason for his immunodeficiency is still unclear.

Early on, doctors thought he had Crohn's disease, an inflammatory bowel disease, but that turned out not to be the case. They also haven't been able to identify a typical gene disorder that may be the source.

Most immunodeficiency disorders present themselves in childhood. Adult onset that isn't linked to a genetic event is even more uncommon, Dr. Holter says.

"I think when you have close to 25 immunologists look at you and they can't figure out what's causing the problem, you can call that pretty rare," she says.

The ordeal has taken an emotional toll on the family. "It's been devastating. It's traumatic for the children to have to watch someone who was once so strong suffer," says Nikki.

Being uninsured has added financial stress. Billy had just started a new job training to be a kitchen manager when he first got sick. As a result, he didn't have insurance. He was able to apply for Medicaid, but his coverage was canceled once he started receiving disability assistance.

Oklahoma University Medical Center has become the family's second home. Nikki has moved to nearby Tulsa in order to be able to spend half of the week by Billy's side.

Billy is currently receiving treatment that helps him replace the cells his body isn't making. He's also receiving immunosuppressants to suppress aggravation in his gut.

"This is a very unfortunate situation for a very nice 29-year-old and we will keep offering him the best clinical care we can," Dr. Holter says.

Billy has cycled through five hospitals in the span of 12 months, and he and Nikki hope their next move will take them East. Billy recently applied for the Undiagnosed Diseases Program at the National Institutes of Health. The program uses a combination of scientific and medical expertise to help patients with mysterious conditions.

Nikki, who has started a support group for Billy on Facebook and provides updates on his condition on his MySpace page, says she refuses to give up: "Billy deserves every opportunity to survive. He's a hard working man who took care of his family."

All About Crohn's Disease • National Institutes of Health