LONDON, England (CNN) -- A new robotic suit could transform the lives of paralyzed people, giving them the ability to walk again. 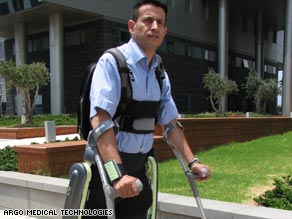 A lightweight robotic suit can help some wheelchair users walk.

The invention, known as ReWalk, acts like a kind of exoskeleton. It consists of lightweight, motorized leg supports and an assortment of intricate motion sensors.

Users wear a backpack that holds a computerized control box which helps the medical device recognize when a step needs to be taken.

"Standing changes my whole environment. I don't have to look from the bottom up. Now I am eye to eye with everybody," Radi Kaiof, who has used the device, told CNN.

Kaiof, a former Israeli soldier, was paralyzed from the waist down 20 years ago. He doesn't have feeling in his legs but is still able to move with the use of the robotic suit.

Watch Kaiof walk with the assistance of the suit »

With the assistance of crutches, which offer balance and support, people paralyzed from the waist down can walk, bend, sit and even climb stairs when they wear the suit.

The futuristic invention offers an alternative to using a wheelchair for those who have functioning upper bodies and are capable of standing with the use of supports.

It is the creation of Dr. Amit Goffer, an engineer and founder of Haifa, Israel-based high-tech firm Argo Medical Technologies. Goffer was inspired to create the device more than a decade ago after he became disabled in an accident.

The medical technology that could help paraplegics do what was once considered impossible isn't available for purchase yet. The device wasn't ready for testing until late 2007 and currently is in clinical trials in Tel Aviv.

More trials are planned for the United States and Europe, and if the product receives the necessary approvals, it could hit the market in 2010.

The price of the device hasn't been set yet, but is expected to be comparable with the typical average yearly expense of using a wheelchair.

The robotic suit improves the quality of life of people paralyzed from the waist down, according to Goffer, who wanted to give paraplegics an alternative to using a wheelchair. It also benefits their overall health since it keeps their bodies active all day long, he says.

But when it comes down to it, the invention is all about helping people regain respect. Dignity is "the No. 1 problem" for people who use wheelchairs, says Goffer.

For Kaiof, the former soldier, the robotic suit has changed his life. Before he tried it on, his daughter had never seen him stand before.

When he stood before her for the first time, she couldn't believe just how tall he was, he recounted to CNN.