(CNN) -- Dr. Julie Gerberding, director of the Centers for Disease Control and Prevention, will leave her post by noon on January 20, the day President-elect Barack Obama is to be sworn in to office. 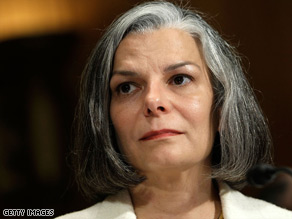 Dr. Julie Gerberding, director of the Centers for Disease Control and Prevention, has resigned effective January 20.

In an e-mail to the staff at the Department of Health and Human Services, which includes the CDC, outgoing HHS Secretary Michael Leavitt asked Gerberding and several other senior officials from his team to submit their letters of resignation.

"She did so, and it was accepted, and it is effective January 20," CDC spokeswoman Karen Hunter said.

Leavitt explained his move this way: "The next phase of Transition involves the departure of our team on January 20, and the arrival of President-elect Obama's team later that day," his e-mail said. "In order to create a clear path for leadership transition, I am attaching a list of senior leaders who will become the acting heads of their respective agencies and offices (or in some cases, remain as heads of their respective agencies and offices) until the new administration appoints individuals to various leadership positions."

In addition to the change at CDC, Assistant HHS Secretary Charlie Johnson will serve as acting secretary, Leavitt said.

CDC's Chief Operating Officer William H. Gimson III will take over as interim director at the agency until the next HHS secretary appoints a new one, the e-mail added.

Gimson and Gerberding were traveling and unavailable for comment.

All About Centers for Disease Control and Prevention