(CNN) -- In April, at age 34, Giyen Kim dropped a 60-hour-a-week job to follow her childhood dream of becoming a writer. Now, she's primed to clear her next personal hurdles: making money from writing, and losing weight. 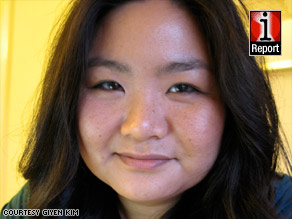 Giyen Kim of Seattle, Washington, wants to lose weight and earn money from blogging this year.

"I made a lot of changes last year and I just really started to focus on the things that were important to me, my passions, and just really flipped my life upside down," she said. "When this year came around, I just thought my weight has been an issue for a really long time, and this just seemed the year to conquer it."

CNN recently asked viewers to talk about their New Year's resolutions on iReport.com and upload photos and videos during their journeys of change. Kim, who had been tracking her 2009 goals on her personal blog, jumped to the challenge. Share your story with iReport.com

Kim, who lives in Seattle, Washington, submitted a video of herself talking about the things she would like to do differently in 2009, including losing weight and saying "yes" more often to life experiences. iReport.com: Watch Kim's video

Her resolutions come after a year of personal and professional upheaval.

For 10 years, Kim worked at a nonprofit organization, and was serving as a director until April. She felt stressed in the job, and didn't like the boss who had replaced her previous boss. But one sleepless night changed everything. Visit CNNhealth, your connection for better living

"I did something I had never done since I was a kid, which was: I prayed about it. And I'm not religious at all, but I was just concentrated, meditating on what I should do next. And I finally fell asleep, I woke up, and I said, 'I have to quit my job!' And that was it," she said.

Initially, after leaving the job, she had a "freak-out period" in which she constantly questioned what she was doing, but writing down her thoughts just for herself got her through the tough time.

Now, Kim is a freelance writer, blogger, and a nonprofit consultant on the side. She's also working on a book about her life.

She said she's more happy than she's been in her adult life, although still worries about finances.

Working at home, she has a lot more time to dedicate to exercise, cooking and other "self-care stuff" she had put aside when she worked 60 hours a week.

When she was a child in Coos Bay, Oregon, Kim knew she wanted to be a journalist or a writer one day, but her parents wanted her to go into a more lucrative career such as law or medicine.

Kim's own 14-year-old daughter, on the other hand, is "totally freewheeling -- she knows she can do whatever she wants," she said.

"I think that growing up Asian, and as a woman, you're totally raised with this notion that you should keep it all inside and not have a lot of self-expression," she said. Blogging "gives me the freedom to branch out," Kim said.

Her blog, Bacon is My Enemy, serves as her online diary, in text and video. She recently posted a list of 28 things she's proud of or thankful for from 2008.

This year she hopes to earn an income from writing and blogging, she said. The blog's name came about because she's trying to lose weight -- but still loves those pork strips.

She also set up a Flickr page in November called "Shrinking Giyen" to chronicle her weight loss journey in photos.

While she has been trying to lose weight for years, her strategy for 2009 is to focus on small goals, not quick fixes. She aims to lose one or two pounds a month, which will add up over the course of the year.

She counts her calories diligently using the Web site calorieking.com, which allows users to tabulate the calories for the foods they eat each day. Kim finds this effective -- "I will stop myself from snacking because I don't want to put it in the computer," she said.

She aims to lose more than 60 pounds, which would put her back at her pre-pregnancy weight of 120 pounds, but the number isn't so important, she said.

"I will stop when I feel good about my body or feel that I've lost enough weight," she said. "I don't want to chase a number, I just want to feel like I can climb a mountain without feeling like I am going to die."

All About Weight Loss