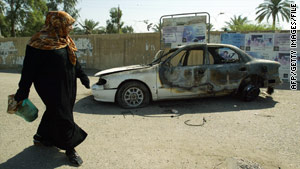 A woman passes a burnt-out car in the aftermath of the 2007 shootout in Baghdad, Iraq.
STORY HIGHLIGHTS
RELATED TOPICS

Washington (CNN) -- A federal judge dismissed manslaughter charges Thursday against five Blackwater security guards in the 2007 deaths of Iraqi civilians in a Baghad square, finding that prosecutors wrongly used the men's own statements against them.

U.S. District Judge Ricardo Urbina found that the government's case was built largely on "statements compelled under a threat of job loss in a subsequent criminal prosecution," a violation of the Fifth Amendment rights of the five men charged.

There was no immediate response to the decision from the Justice Department, which can appeal Thursday's ruling or seek new indictments against the men.

"We're obviously pleased at the decision dismissing the entire indictment and are very happy that these courageous young men can begin the new year without this unfair cloud hanging over them," said Slough's lawyer, Mark Hulkower.