Group: Remains of more than 500 animals found at Philadelphia home 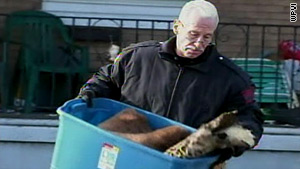 Investigator George Bengal, seen removing items from the home, says the animals may have been sacrificed.
STORY HIGHLIGHTS
RELATED TOPICS

(CNN) -- Investigators recovered the remains of more than 500 animals after executing a search warrant Wednesday at a home in the Feltonville section of Philadelphia, Pennsylvania, according to the city's chapter of the Society for the Prevention of Cruelty to Animals.

The group's director of law enforcement said he believes the animals -- the majority of which were chickens -- were sacrificed as part of a Santeria religious ritual.

The animals included "dozens of sheep, goats ... every type of farm animal you can think of," the Philadelphia SPCA's law enforcement director, George Bengal, said.

The SPCA believes two sets of remains are those of small primates, possibly monkeys.

Philadelphia SPCA enforcement officers were first called to the home over the weekend to tend to two emaciated dogs. The organization said that after obtaining a search warrant, its officers found the home littered with animal remains. The officers also found an AK-47, ammunition, dozens of knives and an altar with candles, the group said.

Philadelphia police were called after that, and Wednesday's search resulted.

The dogs were dirty and malnourished. They were put in protective custody after medical evaluation and treatment, the Philadelphia SPCA said.

Bengal said that the U.S. Supreme Court has ruled that rituals of Santeria -- a religion similar to voodoo and originated in Cuba and Brazil -- are permitted under the Constitution. But he believes these animals may not have been sacrificed humanely. If that is the case, the home's owner could be prosecuted, he said.

The only rooms of the three-bedroom home without bones were the master bedroom and the bathroom, according to Bengal.

Animal sacrifices in Santeria rituals are common in Philadelphia, but this case stands out because of the number and condition of the animals involved, Bengal said.

"This place was incredible," he said.