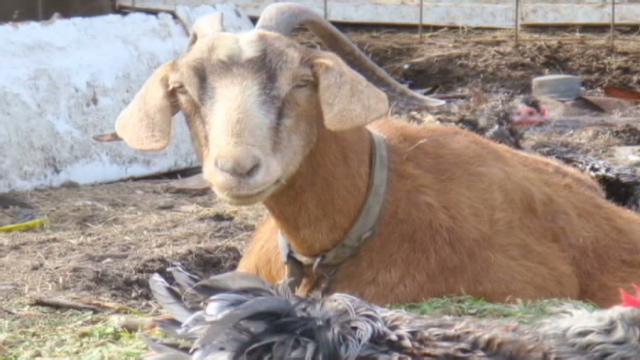 Miami, Florida (CNN) -- Freedom's Flight is a beautiful thoroughbred with an impressive pedigree. His bloodlines can be traced to two of the greatest race horses of all time, Seattle Slew and Secretariat.

But, unlike his kinship, Freedom's Flight's racing career ended before it had even started. It was almost two years ago when the thoroughbred's leg snapped right out of the gate at Miami's Gulfstream race track. The animal's days as a cherished racehorse came to an abrupt end.

"He came from the famous Clairborne farm and ended up on one of the worst farms in America," says new owner Richard "Kudo" Couto.

That "worst" farm in America turned out to be an illegal slaughter farm in Miami-Dade County, Florida. Couto, working for the South Florida Society for the Prevention of Cruelty to Animals, participated in a raid on the farm and rescued Freedom's Flight. The timing of that rescue may have saved Freedom's Flight's life. The horse was limping around on his broken leg, he had sores on his body, and you could see his bones protruding from his dirty coat.

Some 18 months since his rescue, Freedom's Flight looks more like the stunning race horse that was worth thousands of dollars than the injured horse that was sold for $50 to an illegal slaughter farm.

"Prior to his rescue, I didn't know that illegal slaughter farms existed in the country -- let alone under my nose in my own county," says Couto.

This new knowledge has motivated Couto. "It really made me buckle down and basically dedicate my life to shut this industry down. It's become personal for me," he says.

Couto suspects that there are more than 100 illegal slaughterhouses in the area. There is only one slaughterhouse that operates legally, Cabrera's, and there the United States Department of Agriculture inspectors are housed on its property.

Many of these illegal places are concentrated in an unincorporated area of Miami-Dade County. The roads are dirt, the vegetation thick and uninviting. This is the western fringe of Miami along the rim of the Everglades, an area considered a sort of no-man's land.

There are signs in English and in Spanish advertising animals for sale. Tarps are put up to hide what is behind the chain link fences, but most of these businesses are open to the public. "You don't have to be a rocket scientist after walking the properties and seeing the dead carcasses, the guts in the trash bins, the slaughter tables, the knives -- all of the tools of running this type of operation is right in front of you," says Couto.

CNN visited several of these establishments. At one location where a pig was being carved on one table and a chicken on the other, we asked to film on the property. "This slaughterhouse isn't as clean as you can see, try Cabrera's," said the unidentified man behind the slaughter table. Like several places we visited there was blood on the floor, dirty butcher knives and an overwhelming stench.

Couto says it isn't the slaughtering of animals that has put him on this mission. It's the way the animals are treated.

"These animals are living in extreme filth. They're beaten. The way they're slaughtered is inhumane," says Couto.

Couto has been on a one-man crusade to shut down illegal slaughterhouses that are operating without licenses and without oversight by the health or agriculture departments. He was first exposed to what he calls the "dark underbelly" of the area when, with the Florida SPCA, he was investigating the slaughter of horses for their meat.

For the past year he has used a video camera to collect evidence. Couto has simply walked right into dozens of slaughterhouses and has filmed bloody slaughter tables.

One local agency that spends a lot of time in the area because sections of it are considered protected wetland is the Miami-Dade Department of Environmental Resources Management. Carlos Espinosa is in charge of enforcing the county's environmental regulations.

Couto took his story and his videos to every local agency he could think of with oversight responsibility. He tried to set up a task force with agencies in charge of violations such as animal cruelty, illegal structures, illegal businesses, permit problems and zoning issues. A sign-in sheet from one of these meetings shows many of the agencies attended the meeting, but Couto says nothing came of it.

CNN contacted Miami-Dade Animal Services Department, an agency that had a representative at that meeting. Spokesperson Xiomara Mordcovich said the agency does not deal with issues involving farm animals and directed us to the Miami-Dade Police Department.

The Police Department declined an interview. "We are not actively investigating any incidents involving illegal slaughterhouses," the department said in an e-mail. Then it referred us back to Animal Services and also to the code compliance department.

Charles Danger, director of the Miami-Dade Building and Neighborhood Compliance Department, admits that it was because of Couto's persistence that it is now putting together a multi-agency task force he called "Operation Miss Piggy and Mr. Ed."

According to Danger, part of the reason nothing has been done to clean up this area is because of fear for the safety of inspectors.

Danger says the Miami-Dade Police Department is now on the new task force, which also includes agencies such as the state health department and the U.S. Department of Agriculture. "It comes from a lot of years of illegal operation. We have to do it together because it's not going to be easy," says Danger.

One organization that will keep tabs on the progress is the Animal Recovery Mission. Couto says he will not go away quietly. He calls his mission "redemption and revenge for Freedom's Flight and what he went through."