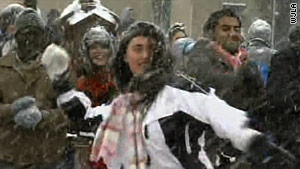 About 200 people were in a snowball fight in Washington when a plainclothes officer is alleged to have drawn a gun.
STORY HIGHLIGHTS

Washington (CNN) -- Washington police were investigating on Sunday whether an off-duty officer drew his gun in the midst of a snowball fight involving a couple hundred people.

The Metropolitan Police Department said video from a local media outlet at the scene Saturday did not show the officer with his weapon drawn. However, authorities have since received "additional images and statements that would seem to support the allegation that the off-duty member did pull a gun," a police statement said.

About 200 people from a D.C. neighborhood had gathered Saturday to brave a snowstorm for a massive snowball fight, CNN affiliate WJLA reported.

"It was pretty fun," one unidentified participant told WJLA. "And then, you know, when the gun came out, uh, it just changed the tone of the thing a little bit."

The off-duty, plainclothes officer was driving in the area of the snowball fight when several snowballs hit his vehicle, police said. The officer exited the vehicle and yelled at the crowd, WJLA reported; witnesses accused that officer of drawing his gun.

A uniformed police officer who subsequently arrived was holding a gun at his hip, but he eventually returned it to his holster, video from WJLA shows. MPD Assistant Chief Peter Newsham said the uniformed officer was responding to a 911 call that someone -- apparently the plainclothes officer -- had a gun, according to WJLA.

The uniformed officer holstered his weapon when he recognized the plainclothes officer, Newsham said, according to WJLA.

The police statement said "there is no evidence that [officers] pointed any weapons in the direction of the crowd or at any individuals."