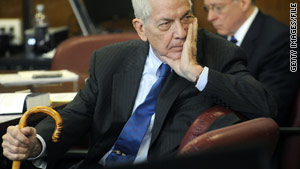 Tony Marshall will be sentenced Monday for trying to bilk his mother Brooke Astor's fortune.

(CNN) -- He was a cold, calculating, "morally depraved" man who spent the last years of his socialite and megaphilanthropist mother's life bilking her fortune to line his pockets.

That's one way to see Anthony Marshall -- and it's the only way, according to the prosecutors who secured a conviction against him for grand larceny and scheming to defraud his mother, Brooke Astor.

Now as the 85-year-old son prepares to be sentenced Monday for his crimes, another portrait of him has emerged -- thanks to close friends and celebrity acquaintances (including Al Roker and Whoopi Goldberg) who sent letters to the court in hopes of saving him from a lengthy prison sentence.

The man prosecutors described during the trial is apparently unrecognizable to many of Marshall's friends and acquaintances.

He was a loyal churchgoing man, a Purple Heart recipient wounded in Iwo Jima during World War II and a son who tried mightily but could never live up to the high ideals of his socialite mother, according to letters friends submitted to the court.

And now, they say he is a frail and sickly man who has faced extreme humiliation and would essentially be given a death sentence if a judge hands down the maximum sentence allowed.

It will be up to Judge A. Kirke Bartley Jr. to decide how to reconcile the two portraits of Tony Marshall. He faces a minimum 1 to 3 years, or as much as 8 to 25 years in state prison.

The drastically differing views have only further heightened interest in the case, which during the trial stage was a tabloid feeding frenzy, fostering headlines such as "Bad heir day," "Mrs. Astor's disaster" and "DA's kick in the Astor." The witness list was a virtual "Who's Who" of New York's social elite -- including Henry Kissinger, Graydon Carter, Barbara Walters, Vartan Gregorian and Annette de la Renta.

During the case, prosecutors and witnesses portrayed Marshall as an only son preying on his physically and mentally ill 101-year-old mother.

Assistant District Attorney Joel Seidemann called the case "disturbing," and said the trial told the story of "how a son, an only son, would stoop so low to steal from his own mother in the sunset years of her life in order to line his own pockets and the pockets of his wife."

His only goal, they said, was to selfishly tap her fortune -- money that prosecutors said Astor intended to donate to ordinary New Yorkers who needed help after she died.

During trial testimony, Marshall's lawyers called no character witnesses to come to his defense. So the new letters from friends are the first attempts by those who know him to share what they believe is his true character.

Whoopi Goldberg told a judge in her letter that she met Tony Marshall and his wife Charlene 10 years ago when Goldberg moved into a building on the Upper East Side with Frank Langella. Unlike other residents who turned their nose up at her, Goldberg said she became quick friends with the Marshalls. Her interactions with Tony, she wrote, gave her an insight into his relationship with his mother, and in turn taught her about how fame can affect family dynamics.

"I also understand what it must be like for my own daughter to be around my fame," she wrote. "I am not comparing myself to Mrs. Astor, but I've seen how you can be dismissed as not being good enough, or hip enough, and seeing it happen to Tony made me make sure that it didn't happen to my own daughter."

The humiliation and ugliness of the trial was punishment enough and a prison sentence would be unjust, friends argued in the letters.

Marshall's cardiologist, Kenneth W. Franklin, also wrote to urge the judge to consider his age and health in sentencing.

A prison sentence "will accelerate his deterioration from cardiac and neurologic disease and would result in his premature death due to medical complications," he wrote.

NBC's Today show weatherman Al Roker came to Marshall's defense too, having met him at his church 10 years ago.

He argued Marshall had suffered enough, paying a price greater than any sentence a judge could hand down -- seeing his son turn on him during the trial and being portrayed in a negative light each day.

"Given his advanced age and deteriorating health, justice may be better served by turning a compassionate eye towards this good son, father and patriot and finding it in your heart not to add 'prisoner' to Anthony Marshall's otherwise unblemished resume," Roker wrote in his letter to the court.

Goldberg too, believed "breaking this man" by putting him in prison, was not the right punishment.

"Please don't put him in jail," she writes at the end of her letter. "It would only amount to an unnecessary cruelty that would serve no real purpose. Hasn't Tony been through enough?"