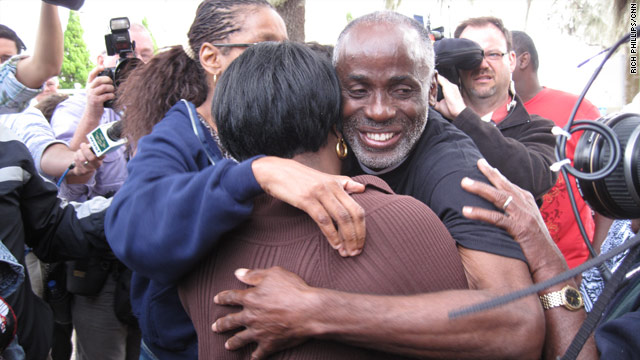 Bartow, Florida (CNN) -- A day after a Florida man was released from prison after serving 35 years for a sexual assault that he did not commit, law enforcement authorities are turning their attention to finding out who was responsible.

James Bain was set free Thursday after a DNA test showed he did not kidnap and rape a 9-year-old boy in Lake Wales, Florida, in 1974.

DNA found at the crime scene has been sent to the Florida Department of Law Enforcement for further testing. It will be entered into Florida and national databases to see if it matches anyone whose DNA is already in the system.

"If there's a rapist in our community, we want him removed," said Lake Wales police Capt. Troy Schulze.

If there is no positive hit on the DNA, Lake Wales police and the Polk County state attorney then would have to decide whether to reopen the case.

Bain on Thursday walked out of the Polk County Courthouse a free man.

"I'm not angry. ... I can't be angry. Because everybody did what they had to do when this occurred," he said afterward. "... It's just sad the way the outcome came. But I don't have no bitterness for that."

Bain was 19 when he was convicted on charges of kidnapping, burglary and strong-arm rape after the young victim picked a picture of him out of five photos.

Bain was sentenced to life in prison.

Of the 245 people in the United States whom DNA testing has exonerated, none had spent more time behind bars than Bain, according to the Innocence Project, a national organization dedicated to exonerating wrongfully convicted people through such testing.

The victim of the crime, now 44, lives in Florida and has been made aware of the latest developments, multiple sources said.