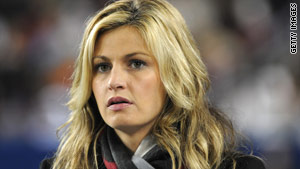 ESPN reporter Erin Andrews said learning of the videos has caused her distress, according to court documents.

Los Angeles, California (CNN) -- A man accused of taping ESPN sports reporter Erin Andrews in the nude through hotel peepholes and posting the videos online will plead guilty to a federal stalking charge, according to a court document filed Thursday.

Michael David Barrett, 48, will enter a plea on December 15, said Thom Mrozek, spokesman for the U.S. attorney's office in the Central District of California.

A criminal complaint filed in October accused Barrett of taping Andrews then making seven videos that he posted on the Internet.

"Mr. Barrett accepts full responsibility for his conduct. He apologizes to Ms. Andrews, and expresses his deep regret for his conduct that caused her so much pain. It is his sincere hope that these events can now become an opportunity to make positive changes in his life," the statement said.

Barrett was arrested in Illinois but will appear in Los Angeles federal court, Mrozek said. Barrett is charged with interstate stalking, which carries a maximum penalty of five years in prison.

An Illinois judge released Barrett on bail in October.

Andrews, 31, is a sideline reporter for ESPN, traveling around the country covering college football games. According to the October criminal complaint, Andrews said that she became aware of the videos in July and that their posting has caused her distress, anxiety and trouble sleeping.

"She is a very strong young woman. Time is a good healer," Grossman said. "However, she continues to feel and experience the ramifications of what occurred every time she steps foot into a hotel room, and in her business, she lives in hotel rooms."

Grossman said he and Andrews are in the process of reviewing the evidence against Barrett and the plea agreement, and Andrews will speak before the court at the hearing next week.

The plea agreement filed Thursday alleges that Barrett recorded videos of Andrews while she stayed at hotels in Columbus, Ohio; Milwaukee, Wisconsin; and Nashville, Tennessee.

The filing alleges Barrett made reservations at the hotels and altered the peepholes to shoot video of Andrews.

Barrett allegedly attempted to sell the videos to celebrity gossip site TMZ in January 2009. TMZ did not purchase the images, but employees of the Web site assisted in the investigation by providing information to Andrews' attorneys, authorities said.

CNN's Khadijah Rentas and Sonya Hamasaki contributed to this report.