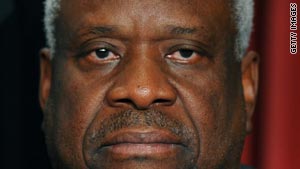 WASHINGTON (CNN) -- Two Supreme Court justices engaged in a late-night exchange of harsh words before the execution early Wednesday of a convicted Tennessee killer who had been sitting on death row for nearly three decades.

Justices John Paul Stevens and Clarence Thomas disagreed over whether to grant a stay of execution for Cecil Johnson Jr.

The stay eventually was denied, and about an hour later, at 2:34 a.m., Johnson was put to death by lethal injection at a Nashville, Tennessee, prison.

The 53-year-old inmate had been convicted of murder in a 1980 shooting spree at a convenience store near the state capital. The victims included 12-year-old Bobby Bell Jr., son of the store owner, who was wounded. Two other men sitting in a nearby taxicab also were shot to death.

Stevens, who was initially presented the last-minute appeal by Johnson's lawyers, would have granted the stay, along with Justice Stephen Breyer. Stevens was concerned that too much time had elapsed between sentencing and the planned execution, amounting perhaps to cruel and unusual punishment.

"Johnson bears little, if any, responsibility for this delay," said Stevens, who said procedural hurdles at the appellate stage for capital defendants created what he called "underlying evils of intolerable delay."

"The delay itself subjects death row inmates to decades of especially severe, dehumanizing conditions of confinement."

It is an issue that the 89-year-old justice has long urged his colleagues to address, with little success.

In his early years on the high court in the mid-1970s he had supported the resumption of the death penalty after a four-year moratorium imposed by the Supreme Court. But in recent years, he has voiced his opposition to capital punishment, particularly in cases involving inmates asserting their right to challenge their sentences.

Thomas reacted strongly to Stevens' statement. The conservative jurist said the inmate had challenged his conviction and sentence for nearly 29 years and "now contends that the very proceedings he used to contest his sentence should prohibit the state from carrying it out."

"In Justice Stevens' view, it seems the state can never get the timing just right. The reason, he has said, is that the death penalty itself is wrong." Thomas said. "As long as our system affords capital defendants the procedural safeguards this court has long endorsed, defendants who avail themselves of these procedures will face the delays Justice Stevens laments."

Then Thomas goes on to say there are "alternatives," citing the custom in England centuries ago to carry out an execution the day after a conviction.

"I have no doubt that such a system would avoid the diminishing justification problem Justice Stevens identifies, but I am equally confident it would find little support from this court."

The high court had been presented with Johnson's emergency appeal early Tuesday afternoon, but apparently the time needed to produce the Stevens and Thomas statements delayed the high court from issuing its denial of a stay until 1:38 a.m. Wednesday.

The execution was carried out as scheduled, with no problems reported by corrections officials.