(CNN) -- Six-year-old Makayla Sitton didn't get to act in The Nutcracker Ballet. The night before she was to go on stage, she was shot to death with three others in a home in Jupiter, Florida.

"I do not know how we're ever going to recover from this, but we know where she is. She is in heaven," her father, Jim Sitton, told CNN affiliate WPTV-TV of West Palm Beach, Florida.

"God has blessed us with this beautiful girl, and he just took her home a little bit earlier than we wanted," he said, struggling to hold back tears.

Police were searching Friday for a suspect in the deaths of Makayla and three others: twins Carla Merhige and Lisa Knight, 33, and Raymonde Joseph, 76, police said.

Patrick Knight and Clifford Gebara were wounded in the shooting, police said. 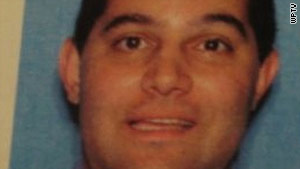 Detectives are looking for Paul Michael Merhige, 35, in connection with the Thanksgiving night shootings.

Officers were looking for Paul Michael Merhige, 35, who is thought to have left the area armed, said Jupiter police Sgt. Scott Pascarella. The dead were Merhige's twin sisters, his aunt and 6-year-old cousin.

One of the victims -- Knight -- was pregnant, Collins-Ortiz said Friday. The U.S. Marshals have joined the search for Merhige, she said.

The shooting occurred about 10 p.m. ET Thursday. Pascarella said he did not know the motive.

Merhige is thought to have driven away in a blue 2007 Toyota Camry with Florida license plate number W42 7JT, the officer said.