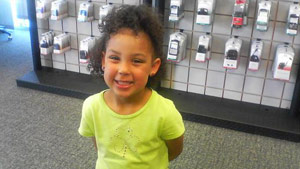 Police say Shaniya Davis, 5, was sold into prostitution by her mother.

Authorities believe the child, Shaniya Davis, was kidnapped, raped and murdered after being reported missing November 10. Her body was found six days later on a roadside about 30 miles from her hometown of Fayetteville, North Carolina. Her funeral was Sunday.

O'Neal said in a statement released by his team, the Cleveland Cavaliers, that he was touched after seeing Davis' story on CNN sister network HLN's "Nancy Grace" show.

"What happened to her was tragic. I wanted her to have a funeral that would be as beautiful as she was," O'Neal said in the statement.

Corey Breece, of Rogers and Breece Funeral Home, told the Fayetteville Observer he wouldn't discuss the cost of the child's service, but he noted a child's funeral "averages around $4,500."

The girl's father, Bradley Lockhart, and his family had set up a trust fund to help raise money to pay for the service, according to the Fayetteville Observer.

Family friend Vaughn Eason told the paper any remaining money would be used for groups and charities working to assist abused and neglected children.

Police have charged Mario Andrette McNeill with kidnapping and said he also will face murder and child rape charges.

Davis' mother, Antionette Nicole Davis, has been charged with human trafficking and other offenses. Police have said they believe she was prostituting the girl.

O'Neal, as a volunteer for law enforcement agencies in recent years, has been active in causes that deal with domestic violence issues, mainly child-abuse cases.