Burned teen's mom: 'It's been a roller coaster ride' 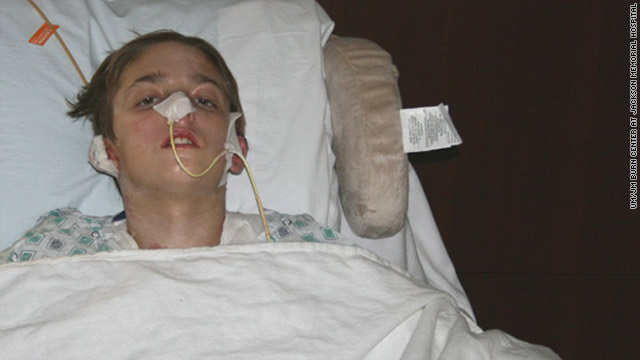 Fort Lauderdale, Florida (CNN) -- Just taking a sip of water or walking to the bathroom is excruciatingly painful for 15-year-old Michael Brewer, who was burned over 65 percent of his body after being set on fire, allegedly by a group of teenagers.

"It hurts my heart to see him in pain, but it enlightens at the same time to know my son is strong enough to make it through on a daily basis," his mother, Valerie Brewer, told CNN on Wednesday.

"I want to express my deepest sympathy to Mikey and his family," Jeremy Jarvis said. "I will pray for Mikey to grow stronger every day and for Mikey's speedy recovery."

Jarvis' older brother has been charged in the October 12 attack in Deerfield Beach, Florida.

When asked about the teen's statement, Valerie Brewer -- who knows the Jarvis family -- said she "can't focus on that."

"I would really like to stay away from that because that brings negative energy to me and I don't need that right now," she said.

Her son remains in guarded condition at the University of Miami's Jackson Memorial Hospital Burn Center. He suffered second- and third-degree burns over about two-thirds of his body, according to the hospital's associate director, Dr. Carl Schulman.

The teen faces a lifelong recovery from his injuries, Schulman told CNN's Harris.

"Michael's still got a lot of major surgery ahead of him, a lot of rehabilitation and therapy," Schulman said. "He's doing about as well as could be expected at this point in his recovery, but he's got a period of probably several weeks to a couple of months still left in the hospital if everything goes well, but the recovery is lifelong. This is truly a life-changing event."

Valerie Brewer said her son's treatment is excruciating at times. Physical therapy, she said, is "incredibly painful. He almost cries because it's so painful. He's burned badly on the backs of his knees and every time he moves his knee, it pulls, and if it's healing, it pulls the scab and it cracks, and it starts to bleed."

The boy must undergo hour-and-a-half showers, she said, where "they take a piece of gauze, and they wipe off all the dead skin. They give him painkillers for that, but it's incredibly painful and it breaks my heart every time they have to do it. ... That's what we call the torture hour."

Heavy metal musician Ozzy Osbourne sent Brewer a CD, and he plays it on a boom box during the showers, she said. "He focuses on Ozzy, and he gets through his torture hour."

Police were able to interview Brewer on Monday for the first time since the incident. Hospital officials have said Brewer can communicate only in one- or two-word answers.

Valerie Brewer would not go into details about what her son told investigators, but said that "he answered the questions they asked."

The interview was emotional for both the teen and the investigators, according to Maria Schneider, a prosecutor with the state attorney's office in Broward County.

"It was difficult for him to talk about. Difficult for us to listen to," she said of the interview. "Just difficult all around, heart-wrenching. He's doing so much better, but it's such a terrible situation."

Denver Jarvis and Matthew Bent, both 15, are accused along with a third teen, Jesus Mendez, 16, of being in a group that poured alcohol over Brewer and set him ablaze in a dispute over $40, a video game and a bicycle. All three pleaded not guilty in an appearance last week in Broward County Circuit Court. If convicted, they would face a sentence of up to 30 years in prison.

Detectives say eyewitnesses told them that Mendez used a lighter to set fire to Brewer after Jarvis allegedly poured alcohol over him. Bent allegedly encouraged the attack, police said. Brewer jumped into a pool at his apartment complex to put out the flames.

Authorities have said Mendez admitted setting Brewer on fire. According to an arrest transcript, the boy said he made a "bad decision."

Jeremy Jarvis was arrested as a juvenile after Brewer was burned and spent about 30 days in juvenile detention. However, prosecutors have not filed charges against him and are still determining how to proceed. He still could be charged, as prosecutors have 90 days from his arrest to decide whether to move forward with the case.

The boy's attorney, Stephen Melnick, said it appears the younger Jarvis was only a witness to the attack. Broward County schools expelled the seventh-grader after his arrest and he is currently being home-schooled, Melnick said. He described his client was a good friend of Brewer, and said the boy is troubled by Brewer's injuries as well as by his brother facing criminal charges that could land him in an adult prison if convicted.

Valerie Brewer said it was "heartbreaking" when she and her husband learned that her son's attackers may have included kids that they knew.

Her son's recovery has been filled with ups and downs, she said.

"It's been a roller coaster ride, the fear of the unknown," she said. "The first time he spoke to us was joyous but watching him struggle every single day ...