Amanda Knox's parents say their daughter is no killer 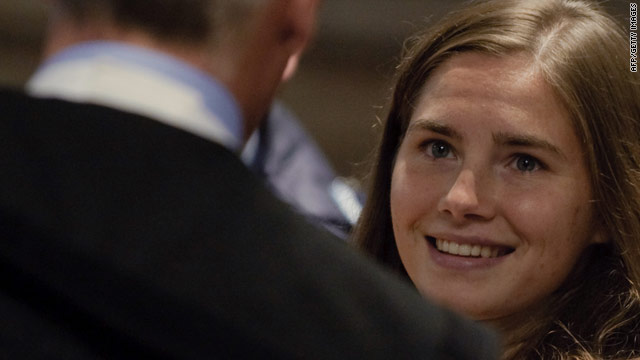 Seattle, Washington (CNN) -- When Amanda Knox's parents head to Italy for closing arguments in their daughter's murder trial they'll be carrying a present they hope desperately she can use soon: a plane ticket home.

In that purchase lies one family's entire hope.

Curt Knox and Edda Mellas say their daughter is nothing like the person they've seen depicted before and during her trial.

They grimace at the description prosecutors have used in court: that Amanda Knox was a resentful American so angry with her British roommate Meredith Kercher that she exacted revenge during a twisted sex misadventure at their home two years ago.

Prosecutors say Knox directed then-boyfriend Raffaele Sollecito and another man infatuated with her, Rudy Guede, to hold Kercher down as Knox played with a knife before slashing Kercher's throat.

"She is totally nonviolent, almost a passive person," Mellas told CNN in a joint interview with her former husband.

So passive was Knox, the parents said, that she couldn't even continue a kickboxing class because she felt it was too violent. She was so caring, they said, that she would make her friends stop a car to let a spider out rather than kill it.

Knox was an easy child to raise in Seattle, Washington, along with her younger sisters Deanna and Ashley, her parents said. She took to soccer early on but hit the books as hard as she played.

It was on the field that she earned the nickname Foxy Knoxy, though they say it was rarely used and taken out of context when Kercher was found killed to portray their daughter as a sex-hungry party animal.

"It was totally associated to soccer and how she prepared herself as a defender, waiting to take on a striker going down," Curt Knox said. "So how people read this nickname is totally wrong."

Eventually, though a star player at college, Knox gave up the sport to focus on her education. She knew she wanted to study in Italy and wouldn't be able to leave the team to go abroad. Her mother said she threw herself into jobs to help the family save for the trip, working as a soccer coach, a barista and in a gallery.

They recall a young woman far different from the wild party girl depicted by prosecutors, one they said found more enjoyment in going to a coffee house and reading a book than going out to a club.

They say she met her former boyfriend and co-accused Sollecito at a classical concert.

Yes, they concede, Knox, now 22, and Sollecito say they were smoking marijuana and having sex at his home the night Kercher was killed, but that was as wild as it got.

They reject the idea of revenge as a motive for Knox to kill Kercher. Mellas said her daughter e-mailed and called to tell her about her new roommate regularly. Knox told her they got along great and spent time together, going to libraries and a chocolate festival.

What has happened in Perugia, Italy, is unfathomable to them.

"Amanda called [and said] 'I hate to wake you up, but something's not right here, I think someone's been in my house,' " Mellas recalled.

The door to the home she shared with Kercher had been ajar when she came home that morning, and when Knox got out of a quick shower, she noticed drops of blood. Kercher's door was locked, and Knox couldn't reach her, she told her mother, adding that Sollecito was calling the police.

Later, when officers broke down the door to Kercher's room, Mellas said her daughter struggled to understand what was going on, hanging on the few words of Italian she understood at the time.

"They were screaming 'A foot, a foot,' that's what they could see," Mellas recalled Amanda Knox saying.

When she learned Kercher was dead in the room, a hysterical Knox called her mother, Mellas remembered.

"We were constantly on the phone," she said. "She was tired, scared, there was a murderer out running around and she was afraid to be alone."

On the day Knox was arrested, Mellas was flying to Italy to be with her daughter, to comfort her and help her find a new place to live since her home was still a crime scene.

But Mellas' plane was diverted to Switzerland, where she switched on her phone and learned that Knox had been charged with murder.

"I felt physically ill, I went to the bathroom to throw up. I was stuck [in Switzerland] for five hours," Mellas recalled, beginning to cry.

By the time she reached Italy and was allowed to see her daughter, Mellas had already heard news reports that Knox had confessed. She was flabbergasted and confused.

See the evidence against Amanda Knox

"It was horrible. We cried most of the time," Mellas recalled of the first meeting. "But we held each other and it all made sense. She told me what happened in the interrogation, how they asked her to imagine the possibilities. She talked about being hit, screamed at, threatened; it was the most horrible thing she had ever been through in her entire life."

We keep telling her it's taking way longer than expected but she will get out of there.
--Edda Mellas
RELATED TOPICS

But even with the way Knox has been treated and portrayed, her parents know they are the lucky parents in this case.

"As parents, the Kercher family received the worst phone call they could get," Curt Knox said, adding he believes Kercher has gotten lost in the sensational coverage. "At least our daughter called us."

After the arrest, Mellas was sure there was a mix-up or problems with translation that would soon be cleared up.

When Guede was later arrested in Germany, police said he had been speaking to a friend on a Skype call monitored by police and had been talking about being at Kercher's house. Mellas and Curt Knox were sure again that everything would be fixed. During the conversation, despite saying that he knew who Amanda Knox was, he never indicated she was at the home the night of the murder.

But after being jailed, his story changed, and he pointed the finger at Knox and her then-boyfriend, Sollecito.

Her family said they've tried to shield Knox from knowing how high-profile the case has gotten and how people are talking about her, discussing what she wears to court and what kind of person she is.

But she does know she may be going to jail for a very long time. During closing arguments, prosecutors asked for her to be sentenced to life in prison, shocking her family who had expected a demand for 30 years.

Read about the case against Amanda Knox

Still, at occasional prison visits, Curt Knox and Mellas try to give Knox a light at the end of the tunnel.

"We have to try and put on a face that it is going to work out," Mellas said, beginning to cry. "We keep telling her it's taking way longer than expected but she will get out of there. They will not put an innocent 20-year-old in jail, they just can't."

They take solace and hold onto the moments the court allows Knox to share with her parents after the trial has recessed each day.

"They allowed us to go into the back room and say goodbye and hug her, tell her we love her," Curt Knox said choking up. "Just those few seconds are worth a lot."