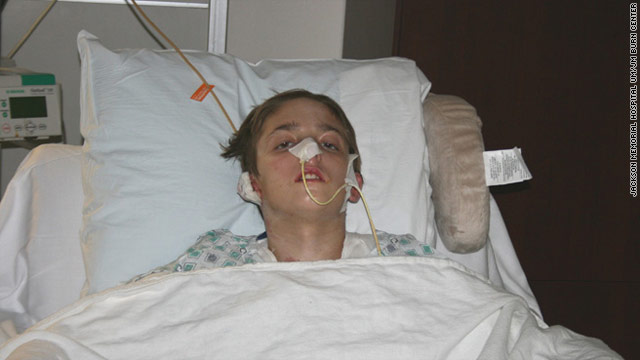 Hospital officials say Michael Brewer, 15, shown at a burn center, communicates only in one- or two-word answers.
STORY HIGHLIGHTS

Fort Lauderdale, Florida (CNN) -- A 13-year-old who witnessed another teen being set on fire last month apologized Tuesday, saying he is praying for the boy's recovery and he is sorry for what happened.

Reading to reporters from a statement, Jeremy Jarvis -- whose older brother has been charged in the incident -- said that victim Michael Brewer is in his prayers.

"I want to read something I wrote last night," Jarvis said. "I want to express my deepest sympathy to Mikey and his family. I will pray for Mikey to grow stronger every day and for Mikey's speedy recovery."

Brewer, 15, remains in guarded condition at the University of Miami's Jackson Memorial Hospital Burn Center. He suffered third-degree burns over 65 percent of his body in the Deerfield Beach, Florida, incident October 12, authorities have said.

Police have been able to interview Brewer for the first time since the incident, the Broward County Sheriff's Office said. Hospital officials have said Brewer can communicate only in one- or two-word answers.

Video: Teen set on fire has flashbacks
I want to tell my brother D.C. I love and miss him. I just hope and pray we all get through this.
--Jeremy Jarvis
RELATED TOPICS

"The more information we have, the better position we are in to make the right decision" as far as charges and how to proceed, said Maria Schneider, a prosecutor with the state attorney's office in Broward County.

"I would say he [Brewer] needs a little more time to be fully prepared to provide a detailed account of the incident."

Jeremy Jarvis was arrested as a juvenile after Brewer was burned and spent about 30 days in juvenile detention. However, prosecutors have not filed charges against him. He still could be charged, as prosecutors have 90 days from his arrest to decide whether to move forward with the case.

His brother, Denver, 15, is among three teenagers charged as adults with one count of attempted second-degree murder in the attack. He has pleaded not guilty.

"I want to tell my brother D.C. I love and miss him," Jeremy Jarvis told reporters Tuesday. "I just hope and pray we all get through this."

The boy's attorney, Stephen Melnick, would not allow reporters to ask him questions.

The extent of Jeremy Jarvis' involvement remains under investigation, Melnick said, adding that police took a statement from Brewer on Monday. "As far as we know, he [Jeremy Jarvis] just followed and watched what happened," he said.

Denver Jarvis and Matthew Bent, also 15, are accused along with a third teen, Jesus Mendez, 16, of being in a group that poured alcohol over Brewer and set him ablaze in a dispute over $40, a video game and a bicycle. All three pleaded not guilty in an appearance last week in Broward County Circuit Court. If convicted, they would face a sentence of up to 30 years in prison.

Detectives say eyewitnesses told them that Mendez used a lighter to set fire to Brewer after Denver Jarvis allegedly poured alcohol over him. Bent allegedly encouraged the attack, police said. Brewer jumped into a pool at his apartment complex to put out the flames.

Authorities have said Mendez admitted setting Brewer on fire. According to an arrest transcript, the boy said he made a "bad decision."

The Jarvis family met at Melnick's office Tuesday, shortly before the boy read the short written statement to reporters. He took no questions. During the meeting, Jeremy Jarvis played with Melnick's dog.

Although the state can still file charges against him, "it didn't matter to him," Melnick said. "It was important to say how this really bothers him and how much he loves his brother and how much he hopes Michael gets better."

He said Brewer is a close friend of Jeremy Jarvis, and the boy is troubled by Brewer's injury as well as by his brother facing criminal charges that could land him in an adult prison if convicted.

Doctors had planned to perform skin graft surgery on Brewer last Friday, but decided to wait and let him heal a bit more first, hospital officials said. His doctor has said he faces several more months in the hospital and will need multiple skin grafts and surgeries.

Melnick would not say whether Jeremy Jarvis is cooperating with prosecutors, but said he didn't believe the boy's apology would affect whether charges are filed. "It's something he's been wanting to say from the start," he said. "He's been asking every day if he could say something."

Broward County schools expelled the seventh-grader after his arrest, Melnick said. He is being home-schooled, and his family is exploring alternative education arrangements.

Jeremy Jarvis turned 13 about a month ago, but "he understands what's happening," Melnick said. "He spent 30 days in a jail."