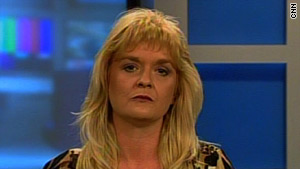 Shannen Rossmiller says a report she worked on was unclassified but now is under military wraps.

(CNN) -- A U.S. military spokesman confirmed the existence Friday of a report on detecting extremism in service members. But he disputed a claim that it was classified only after the shootings at Fort Hood, Texas.

Security expert Shannen Rossmiller told CNN she contributed to a 2008 report aimed at helping the military spot signs of extremism among troops. She said the report was unclassified at its inception but is now under wraps.

Rossmiller says the military's attitude about the report -- she says political correctness trumped the study -- caused it to fail in its intended purpose of helping the military detect signs that one of its own might pose a threat.

On Friday, a spokesman for the U.S. military's European Command, Taylor Clark, said that his command has the report, but he denied that it was classified only after the shootings at Fort Hood.

"The classification of the document hasn't changed since its origination back in August of 2008," he said.

Rossmiller said closer attention to the study could have helped prevent the November 5 shootings at Fort Hood. She said it was meant to detect signs of extremism like those reportedly exhibited by Maj. Nidal Malik Hasan, an Army psychiatrist who authorities say killed 13 at Fort Hood. Hasan was wounded in the incident and is paralyzed from the waist down.

"These people didn't have to die, and that's why I'm speaking out," Rossmiller said.

Rossmiller was involved in the case of National Guard Spc. Ryan G. Anderson, a Muslim convert who was convicted in 2004 of trying to pass information to al Qaeda over the Internet. Afterward, she was asked to contribute to the report, "The Radicalization of Members within DoD" (Department of Defense). It was completed in April 2008, she said.

After the Anderson case, Rossmiller said, the military recognized a need for more awareness to stop radicalization among troops.

Video: Could Ft. Hood be avoided?

"The intent behind the whole report was to provide a useful tool for intelligence officials to spot and identify certain signs of radical behavior," she said. At the time it was completed, it was her understanding that it was not classified, she said.

She told CNN's "Anderson Cooper 360°" that she understood the report was sent to "intelligence officials within the defense community as well as the greater intelligence community."

After the Fort Hood shootings, she said she contacted the military after hearing no mention of the study in the media or from military officials.

"I sat quiet for a week," she told CNN. "... People were acting like there was nothing out there that could have been useful."

Rossmiller said she was told the study was now classified.

"The Defense Department report was intended to prevent something like this, and it's just astonishing that this even had to happen after something like that has been prepared as a useful tool."

A key congressional committee opened an investigation into the shootings Thursday, pledging to find out if authorities failed to "connect the dots" and could have prevented the attack. Members said they planned to focus on whether senior Army officials appropriately dealt with concerns raised by Hasan's colleagues about his "mental stability and political extremism."

Among other issues, the FBI has said it was aware of communication between Hasan an Anwar al-Awlaki, a Yemeni-American cleric who has promoted jihad against the United States and other Western countries. But investigators determined that those contacts were "consistent with research being conducted by Maj. Hasan."

Also, a memo reportedly written two years ago by Hasan's supervisor at Walter Reed Army Medical Center says Hasan demonstrated "a pattern of poor judgment and a lack of professionalism" during his residency at the hospital. CNN could not corroborate the authenticity of the memo, which was obtained by National Public Radio.

A former classmate has said he witnessed at least two of Hasan's PowerPoint discussions that included what he described as extremist views. In these presentations, which were supposed to be about health, the source said that Hasan justified suicide bombings and spoke about the persecution of Muslims in the Middle East, in the United States and in the U.S. military.

"People are saying that, 'Wow, this is brand new,' but in my travels, in talking with counterterrorism experts around the world, especially in Europe, this whole process of radicalization has gone through a much more in-depth study, a much more professional rigor than I think what we've seen in the United States," Rep. Pete Hoekstra of Michigan, the ranking Republican on the House Intelligence Committee, told CNN's Anderson Cooper. "We could have learned from them, and it looks like we didn't."

A law enforcement official familiar with the investigation told CNN that when Hasan first came to the attention of investigators because of his communications with al-Awlaki, officials looked at his military personnel file, and nothing was found that raised suspicion.

None of the items that have been reported since the shootings -- including the reported Walter Reed memo and the PowerPoint presentation arguing that Muslims in the Army should be allowed conscientious objector status -- were part of the file, the official said, but it was noted that Hasan had done research about Muslims in the military.

Rossmiller said she was incredulous when Defense Secretary Robert Gates announced a 45-day review of Pentagon policies to see if the Defense Department had fallen short in identifying service members "who could potentially pose credible threats to others."

That review apparently will do "exactly what this report encompassed," Rossmiller said. "It's just like, you know what? They need to fall on their sword and we need to fix this."

"I think what you need to do here is, you need to understand the phenomenon," Hoekstra said. "I think the political correctness here is not about profiling. It is a reluctance to acknowledge that this problem actually exists, to confront it and ultimately, then, to defeat it. I think that we can study this problem."