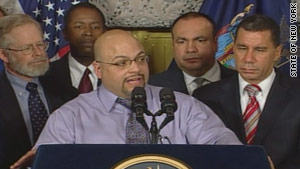 Lenny Rosado says he has devoted his life to fighting for tougher DWI laws since the loss of her daughter, Leandra.
STORY HIGHLIGHTS
RELATED TOPICS

New York (CNN) -- It is now a felony in New York to drive drunk or under the influence of drugs with a child in the vehicle, and will require first-time driving-while-intoxicated (DWI) offenders to install an ignition interlock device in their vehicles.

With a quick sweep of his hand Wednesday, Gov. David A. Paterson signed the Child Passenger Protection Act, known as Leandra's Law in honor of 11-year-old Leandra Rosado, who was killed in a drunken driving accident in October.

Lenny Rosado, Leandra's father, stood nearby, holding a picture of his daughter while tears streamed down his face.

"On that night of October 11, I lost my only child," Rosado said while choking back tears. "As a single parent, she was my heart, my soul and my best friend."

According to Paterson, Leandra's Law will set some of the toughest DWI penalties in the nation and will provide law enforcement officials with the tools they need to prosecute DWI offenders.

Under the law, first-time offenders with a blood alcohol content of .08 or more or under the influence of drugs, and with a child age 15 or under in the vehicle, will automatically have their drivers license suspended, will have to install a ignition interlock device in their car and may be charged with a Class E felony punishable up to four years in prison.

In addition to the increased sanctions, parents caught driving impaired with their children will be reported to the Statewide Central Register of Child Abuse and Maltreatment.

On October 11, Leandra Rosado and six of her friends were packed into a car driven by Carmen Huertas, the mother of one of the girls. Huertas was taking the girls to a slumber party.

Authorities later said Huertas was driving drunk and played a guessing game with the girls, asking them to "raise their hands if they thought they would make it home without crashing."

While speeding up the Henry Hudson Parkway, the car flipped. Leandra Rosado was thrown from the vehicle and died from head and chest injuries. Her six friends and Huertas survived the crash.

Huertas has since been charged with manslaughter, vehicular manslaughter, operating a motor vehicle while under the influence of alcohol, and assault, according to the Manhattan district attorney's office.

Since losing his daughter, Lenny Rosado has turned his grief into action. At the bill-signing ceremony, Rosado said that the day after Leandra died, he made the decision to fight for tougher DWI laws because he didn't want to see another parent or grandparent lose their child in such a reckless way.

"From here on, those that think it's OK to drink and drive with children in the car ... will pay the price," Rosado said. "My daughter's name and Leandra's Law will save lives from here on. Her legacy will live."