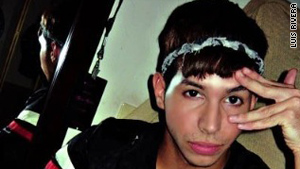 San Juan, Puerto Rico (CNN) -- The suspect in the brutal slaying of a gay teenager in Puerto Rico was charged Wednesday with first-degree murder and four other counts, the prosecutor in the case told CNN.

Juan A. Martinez Matos was arrested late Monday in connection with the slaying of Jorge Steven Lopez Mercado, whose decapitated, dismembered and partially burned body was found Friday afternoon on a road in central Puerto Rico.

In addition to murder, Martinez Matos was charged with three weapons violations and one count of hiding evidence, prosecutor Yaritza Carrasquillo said.

Prosecutors are weighing whether to recommend that Martinez Matos be charged under federal hate crimes law, Carrasquillo said. That decision was not expected to come Wednesday.

The U.S. gay community is asking authorities to investigate whether the slaying was a hate crime, said Pedro Julio Serrano of the National Gay and Lesbian Task Force.

"The brutality of the slaying and the fact that he was openly gay leads us to believe it was very possibly a hate crime," Serrano said Tuesday.

Puerto Rico is a U.S. territory, which means federal agencies have jurisdiction.

The U.S. Attorney's Office, in consultation with local officials and other agencies, would determine whether the slaying will be prosecuted as a hate crime.

"It's at a very preliminary stage," Lymarie Llovet, a spokeswoman for the U.S. attorney's office in San Juan, Puerto Rico's capital, said Tuesday. "There's the potential for a federal investigation."

Martinez Matos, 26, was arrested late Monday at his home in the Mogote de Cayey neighborhood, said Wilson Porrata Mariani, another spokesman for the Guayama police district.

In footage aired on Telemundo-Puerto Rico, Martinez Matos was asked by a reporter if he was gay, to which he replied no, and added, "(Lopez Mercado) tried to kill me."

According to Telemundo and other local reports, Martinez Matos confessed to authorities that he picked Lopez Mercado up from the street, thinking that he was a woman.

When he realized that Lopez Mercado was a man, Martinez Matos said he regressed to an incident when he was sexually assaulted during a prison term, Telemundo and local reports said.

That's when a conflict started between the two, authorities said, leading to the teen's death.

The slaying has reverberated through the gay and lesbian community in the United States, where supporters started a Facebook page called "Justice for Jorge Steven Lopez -- End Hate Crimes." The group demands an investigation by Puerto Rico Gov. Luis Fortuno and prosecution of the case under the federal hate crime law.

The Federal Hate Crimes Law was enacted in 1969 to guard the rights of any U.S. citizen who is targeted because of race, color, religion or national origin, or because of an attempt to engage in one of six protected activities, such as voting, going to school or attending a public venue.

If Martinez Matos is charged under the hate crimes provision, it is believed it would be the first such case under the latest addition to the law.