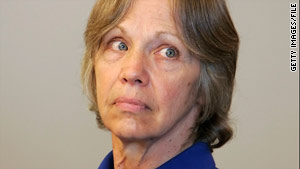 Wanda Barzee, shown here in 2005, and her then-husband are accused of kidnapping Elizabeth Smart in 2002.

(CNN) -- A woman accused along with her then-husband of kidnapping Utah teenager Elizabeth Smart in 2002 is set to plead guilty in federal court Tuesday under terms of a plea deal reached with prosecutors, according to court documents.

Wanda Eileen Barzee, 64, is charged with kidnapping and unlawful transportation of a minor with intent to engage in criminal sexual activity, according to a 2008 indictment that a federal grand jury returned against her.

The terms of her plea agreement have not been made public and will not be until the agreement is executed in court, Melodie Rydalch, spokeswoman for the U.S. attorney's office for Utah, told CNN on Monday.

Barzee and Brian David Mitchell, 56, are accused of abducting Smart, then 14, at knifepoint from the bedroom of her family's Salt Lake City, Utah, home in June 2002.

She was found nine months later, walking down a street in the Salt Lake City suburb of Sandy, Utah, in the company of Barzee and Mitchell, a drifter and self-described prophet who calls himself "Emmanuel." He had also done some handyman work at the Smarts' home.

At a competency hearing for Mitchell last month, Smart, now 21, testified she was held captive in Utah and California during that time. Just after her abduction, Mitchell took her to a wooded area behind her home and performed a mock marriage ceremony with her, she said. During the nine months of her captivity, no 24-hour period passed without Mitchell raping her, Smart testified.

The competency hearing is set to continue November 30, but Mitchell's attorneys have asked for it to be delayed.

Smart, a student at Brigham Young University and a member of the Church of Jesus Christ of Latter-day Saints, testified in October because she was set to leave on a mission, something typical for young Mormon men but becoming more common for women as well.

Many documents in the court cases against Mitchell and Barzee are sealed. However, an order sealing a transcript of an in-chambers conference held last week in the case makes reference to discussing "a possible cooperating witness in the case."

Barzee, who has been housed at the Utah State Hospital while courts determined her competency, filed for divorce from Mitchell in 2004, according to media reports. It was unclear whether the divorce has been granted.

After years of being declared incompetent, Barzee recently was declared by doctors at the hospital to be competent to stand trial, according to the Salt Lake Tribune newspaper.

A state court had ruled she could be forcibly medicated, a ruling that led federal prosecutors to bring a case against the couple, the Tribune said.

Both Barzee and Mitchell still face state charges including kidnapping and sexual assault.