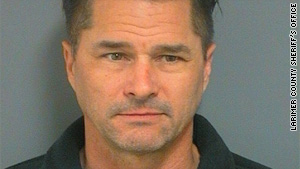 Richard Heene surrendered, sat for his mug shot and was released on Thursday.

(CNN) -- The Colorado couple who said their 6-year-old son was aboard an escaped balloon pleaded guilty Friday to charges related to the well-publicized "balloon boy" case.

Richard Heene pleaded guilty in Larimer County Court to a felony charge of attempting to influence a public servant. His wife, Mayumi Heene, pleaded guilty to a misdemeanor charge of false reporting to authorities.

The incident occurred in October, when a large silver balloon came loose from its moorings in the Heenes' yard and drifted over eastern Colorado. Mayumi Heene called 911 and said the couple's 6-year-old son, Falcon, was inside the craft.

Millions of people across the country watched the saga on television for nearly two hours as military aircraft tracked the balloon in the air and rescuers chased it below.

Mayumi Heene later admitted the whole thing was a hoax and that Falcon was safe in their home the whole time, authorities said.

Watch the moment the hoax was revealed

Video: Did they do this for the show?
RELATED TOPICS

The couple's attorneys have said that the threat of Mayumi Heene's deportation was a factor in the plea deal negotiations.

Mayumi Heene is a Japanese citizen but is in the United States legally.

"Even though Mr. Heene would have a triable case, I believe, to avoid the risk that his wife is deported ... we have decided that the best course of action is to proceed as we are proceeding," Richard Heene's lawyer, David Lane, said Friday.

The judge is allowing the Heenes to leave the state while they remain on bond. Lane said Richard Heene is going to seek employment in New York and also has plans to go to California. Mayumi Heene's attorney said she may accompany him on those trips.

Sentencing will be next month.

Court documents released last month said the couple hatched the plan about two weeks before the incident and "instructed their three children to lie to authorities as well as the media regarding this hoax."

Their motive? To "make the Heene family more marketable for future media interests," the documents said.