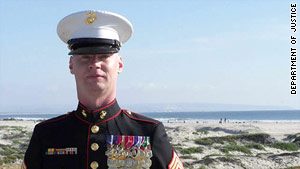 Palm Springs, California (CNN) -- A California man faces a federal judge Thursday because of what he allegedly wore to his 20th high school reunion earlier this year -- a U.S. Marine uniform decorated some of the nation's highest military medals.

Steve Burton, 39, never served in any branch of the U.S. military, but he was seen and photographed several times wearing a Marine uniform and various medals, including the Navy Cross -- the highest medal awarded by the U.S. Navy, federal investigators said.

The U.S. attorney for central California chose Veterans Day to announce that the Palm Springs, California, bank officer has been charged with "unauthorized wearing of military medals or decorations." The federal misdemeanor charge carries a maximum penalty of a year in federal prison upon conviction.

"He has been charged, but these are only allegations," DeFrank said.

The Marine dress blue uniform with lieutenant colonel insignia on the epaulets and a chest full of colorful ribbons may have impressed old classmates, but one person at the reunion was suspicious, according to an FBI agent's affidavit.

Lt. Cmdr. Colleen Solanga -- a U.S. Navy supply officer -- recognized the Navy Cross and knew how rarely that honor is awarded, the sworn statement said. She posed with Burton for a photo, which she sent to the FBI in June, the agent said.

The FBI agent said Internet research showed that Burton had blogged during August 2009 about being a Marine and receiving many commendations and awards. His postings also discussed engaging in combat and serving in Afghanistan and Iraq, the documents said -- particularly in Falluja, a city in Iraq's largely Sunni Arab Anbar province where Marines and militants battled for years.

Burton posted a picture of himself online standing on a beach at Coronado Island, California, wearing a Marines dress uniform, the affidavit said. In the picture, he is wearing the rank of gunnery sergeant and is displaying medals including the Navy Cross, the Legion of Merit, the Navy and Marine Corps medal, the Bronze Star and the Purple Heart, among others.

Burton, who was off work because it was Veterans Day, would not come to the door, a man who came to the door man referred CNN to his lawyer, DeFrank. The man said he was Burton's partner for 18 years and retired from the U.S. Air Force.

A next-door neighbor described Burton as "quiet and nice." She told CNN she saw agents carry away several boxes from the home two weeks ago

A search warrant was executed at Burton's home, said Assistant U.S. Attorney Joseph Akrotirianakis, who did not divulge what was found there.

Akrotirianakis also would not say where authorities believe Burton obtained the medals.

However, an Internet search showed several medals -- or possibly replicas -- for sale online, despite a law banning their advertisement or sale. Even if a medal is a replica, wearing it still violates federal law, Akrotirianakis told CNN.

The Navy Cross is the nation's second-highest award given for valor, second only to the Medal of Honor, authorities said. It is generally awarded for "extreme gallantry and risk of life, beyond the call of duty, performed in combat with an enemy force," according to the prosecutors' statement. The Bronze Star is awarded for "heroic and meritorious achievement or service," while the Purple Heart is awarded "for being wounded or killed in action against an enemy of the United States."