Two cases may change the way teens are punished 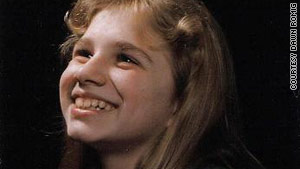 Danni Romig was 12 when a teenaged neighbor kidnapped and strangled her in 2003.

Editor's note: For more on this story, watch CNN's "American Morning" on Monday from 6 to 9 a.m.

Allentown, Pennsylvania (CNN) -- Sixty miles and the twin tragedies of young lives lost to violence link this industrial hub to the tough streets of North Philadelphia.

Here, a grieving mother uses the memory of her murdered daughter to fight on behalf of victim rights. In his West Kensington neighborhood of Philadelphia, a paroled teenage killer uses his second chance to mentor at-risk youth. In these separate cases, both the criminals and their victims were juveniles.

Their stories provide the backdrop for an unrelated pair of upcoming Supreme Court appeals over whether juvenile offenders who commit violent felonies deserve tough prison sentences -- especially life without parole.

On Monday the justices will examine whether the Constitution's ban on "cruel and unusual punishment" should be applied in such cases, and whether young minds, because of their age, have less culpability and greater potential to be reformed.

"These two cases are going to tell us a lot about how far the Supreme Court -- led by Justice [Anthony] Kennedy -- is willing to go in limiting a state's ability to impose incredibly tough sentences on either the young, or in some cases, the mentally retarded," said Thomas Goldstein, co-founder of Scotusblog and a leading Washington attorney. "How much is the Supreme Court willing to intervene here?"

On a quiet street in Allentown, Dawn Romig can look out from her porch and see the city park a block away where in 2003 her world fell apart. There on a snowy late February afternoon, her 12-year-old child, Danni, was abducted by a 17-year-old neighbor. The girl was beaten, raped and strangled.

Romig and her husband, Daryl, were in the courtroom when suspect Brian Bahr was brought in for a first appearance. "I leaned over to my husband and I said, 'Oh my goodness, I know who that is,' " she recalled. "I said, 'I've yelled at him. He was a troublemaker in the neighborhood before.' "

Bahr was tried as an adult, convicted, and given life without parole. Pennsylvania leads the United States in teen lifers with more than 440, according to state lawmakers supporting laws to end such sentences.

Anyone in the state charged with homicide has to be tried as an adult and, if convicted, sentenced to life behind bars.

"He was very close to 18, he was very angry, he knew what he was doing, he knew right from wrong," Dawn Romig said of her daughter's killer. "He had a written plan on paper that they found in his school bag, 23 things to do to a girl in the woods. And he did it all."

He had a written plan on paper that they found in his school bag, 23 things to do to a girl in the woods.
--Dawn Romig

She thinks Bahr deserves to die in prison for his crime. "This was so violent and so premeditated. Other situations deserve a second chance but something as violent as this was -- it was so angry and so violent and so cold."

Edwin Desamour is sitting in a city park in Philadelphia. With him are two teenagers he helps counsel, and they are getting a stern lecture on how to conduct themselves in school.

"Why are you arguing to your teacher?" he asks one boy. "You should know better." Desamour is president of MIMIC, Men in Motion in the Community, a grass-roots group he founded to mentor youngsters in his neighborhood.

He's 36 now, and completed his parole only last June, after two decades. Back in May 1989, 16-year-old Desamour took a ride with some friends, a trip that cost him eight-and-a-half years in an adult penitentiary.

He participated in a fight with rival teens across town. A friend had asked him to come along and help a buddy who wanted revenge for getting beat up.

"I was in that mind-set: I got your back, I'm going to be there for you," Desamour said, standing outside the rundown row house where he grew up. "I had been involved in plenty of incidents where violence occurred. But this time someone got killed."

The victim was 17-year-old Sean Daily, son of a Philadelphia police officer. He was savagely beaten with a baseball bat. The local media played the case as a racially motivated attack. Daily was white while the multiple defendants were all either Hispanic or African-American.

Five young men were sentenced to life in prison. Desamour, initially charged with first-degree murder, received a third-degree conviction and a sentence of seven to 20 years.

"I remember one day just sitting on the prison block and I looked around and I saw some older people there that were in their 70s and 80s," he said. "And I remember thinking to myself, 'I don't want to be like that. I don't want to be that old sitting in prison.' "

Desamour is remorseful for his role in the killing, and fortunate he was a given a chance to turn his life around.

"Coming home from prison was a perfect time for me to really identify key people that I'm surrounded by who are a positive influence on my life. And those people stepped up to the plate."

Effects on youthful offenders not known

Outside a death-penalty context, the Supreme Court has offered little recent guidance on how to treat the youngest of underage criminal defendants. The appellate record for rapists under age 15 is almost nonexistent, legal experts say.

Child legal advocates say many states lack resources to handle young inmates given long sentences, including a lack of proper jailhouse counseling. Few studies have been conducted on the effects on young defendants facing life in prison, said the Equal Justice Initiative, which is representing the key appellant in one of two cases the Supreme Court will examine in oral arguments Monday.

"We have created a forgotten population with a lot of needs," said Bryan Stevenson, lawyer for the appellant, Joe Sullivan.

The 13-year-old was arrested for raping at knifepoint a 72-year-old woman in her Pensacola, Florida, home two decades ago. He denies sexually assaulting the victim; an older co-defendant claimed Sullivan was the rapist.

We have created a forgotten population with a lot of needs.
--Attorney Bryan Stevenson

His lawyers say the now-incapacitated 33-year-old Sullivan is one of only two men in the world currently in prison after being convicted at his age for a non-homicide.

Sexual battery remains a crime punishable by life imprisonment in Florida, and the Florida attorney general's office told the high court that states should have the discretion they have long been given to decide how harshly young criminals should be prosecuted. It is a sentiment echoed by many current and former prosecutors.

"The vast majority of cases that are committed by juveniles should be in the juvenile justice system, but a very small, minute number should be eligible to go to adult court and a small majority of those should be eligible to receive life without parole because that's what society demands, to keep themselves safe from these predators," said Charles Stimson, a member of the conservative Heritage Foundation and author of "Adult Time for Adult Crimes," a recent report on the juvenile justice system.

The Supreme Court in 2005 outlawed the death penalty for underage killers, marking a major change in "national standards" over how to treat this class of offenders.

"It would be misguided to equate the failings of a minor with those of an adult, for a greater possibility exists that a minor's character deficiencies will be reformed," Justice Anthony Kennedy wrote for the 5-4 majority.

Many juvenile justice advocates see promise in Kennedy's words, an indication that the court might apply such legal and moral standards in the non-capital context now before it.

On the other side, victims rights groups say a radical shift in the current juvenile justice system could destroy the legal finality many families seek in healing from tragedy of losing a loved one to violence.

"You're simply transferring the life sentence from the offender to the victims," said Jennifer Bishop Jenkins, co-founder of National Organizations of Victims of Juvenile Lifers. Jenkins speaks from experience. Her pregnant sister and brother-and-law were murdered by a teenager outside Chicago in 1990.

Dawn Romig has testified before the state legislature, trying to block efforts to end life sentences for underage felons. In her tidy brick home, she shares remembrances of her daughter, including a quilt made of Danni's clothing.

You're simply transferring the life sentence from the offender to the victims.
--Jennifer Bishop Jenkins

She and her husband take a visitor to Danni's grave site. They gently clean the marker and remove leaves, revealing the image of Tweety Bird, their daughter's favorite character.

Romig plans to be at the Supreme Court for the two unrelated cases.

"I guess the only thing that came out of this horrible death of Danni is a lesson -- a lesson that my children will have to learn the hard way. My son will respect girls and cherish them, never hurt them and never force them to do something they don't want to do. And I need to try to teach my daughter some warning signs to look for so she can stay away from people" like Danni's killer.

Edwin Desamour offers no excuses, but an explanation for why life on the streets turned him into a teenage killer and convict. In his role as mentor, he sees a measure of deja vu in his young charges.

Desamour advocates for a fresh look at how police officers and courts deal with young offenders.

"Kids can turn their lives around. I turned my life around," he said. "What's at stake here are kids' lives. We're losing two lives. When a violent crime occurs, especially if it's murder, not only does one person die, the other kid dies also. Prison is the cemetery of the living when a kid enters the system where it seems like there is no return once you get up in there."