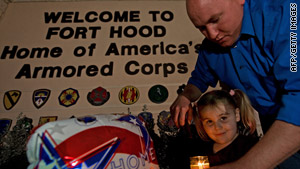 Fort Hood, Texas (CNN) -- Army investigators on Sunday asked troops and civilians for help in the probe of a deadly mass shooting at Fort Hood last week, saying some who fled the gunfire might have evidence.

The statement said such objects would help Army investigators and the FBI "in their bullet trajectory analysis of the scene, to insure the comprehensiveness of the ongoing investigation."

Thirteen people -- a dozen soldiers and a civilian -- died Thursday in the shooting at the Fort Hood Army Post. Some 42 people were wounded, according to the post's public information office. It was unclear how many of those suffered gunshot wounds.

Video: Where the alleged gunman prayed

Among the wounded was Pvt. Joseph Foster, 21, who was preparing for his January deployment to Afghanistan when he was hit in the hip during the attack. With his wife and 6-week-old daughter beside him, he told reporters gathered outside his home Sunday that it was difficult to accept such an attack on his own post.

As of Sunday, 16 gunshot victims remained hospitalized plus the suspect, Maj. Nidal Malik Hasan, spokesman Col. John Rossi told reporters. He did not say where all those hospitalized were being treated. Of the 16, seven were in intensive care, he said.

When Staff Sgt. Alvin Howard's wife heard he was hurt at the post, her feelings were "indescribable," she said Sunday.

Kaneesha Howard told reporters her husband was set to deploy to Afghanistan in January. In 2003, he was deployed to Iraq, she said.

Daughters, Alanna, 9, and Kristen, 7, were shaken by the event.

Alanna said of her younger sister: "She started crying when we went to the hospital because she [had] never seen her dad bandaged up like that."

Howard was shot in the shoulder and was recovering in the hospital, his family said. They were unsure when he would be released.

Rossi said Hasan, a 39-year-old licensed Army psychiatrist who worked at a hospital on the post, is no longer on a ventilator, but remained in critical but stable condition and in intensive care at Brooke Army Medical Center.

Authorities have not identified a motive in the attack at Fort Hood's military processing center, where soldiers report before they head to war.

[The Fort Hood shooting] would have been heartbreaking had it occurred any place in America.
--President Obama
RELATED TOPICS

Efforts to assist those affected by the incident, including family members of soldiers at the post, were ongoing, Rossi said. Fort Hood was awaiting the arrival of two specialists in child psychology and disaster management, he said. "This is not just for those directly affected by this tragedy," Rossi said, noting that effects from trauma sometimes are not immediately apparent.

However, he said, soldiers are trained to respond to violence by controlling and securing the scene.

"Their training kicks in, and that's what we saw," Rossi said. "The troubling part of it is it happened here in our own house."

Army Criminal Investigation Command spokesman Chris Grey said Saturday that all evidence indicates that the suspect acted alone and there was no indication of "friendly fire."

The processing center has been moved to another location so its work can continue while investigators work at the crime scene, Rossi said Sunday.

He told reporters he did not know Hasan's schedule on the day of the shooting, but "my understanding is that there was no purpose for him" to be in the processing center.

The remains of those killed are currently at Dover Air Force Base in Dover, Delaware, undergoing the same process as the remains of soldiers killed in Iraq or Afghanistan. "These heroes are being treated the same way," Rossi said.

Rossi said he had visited with Fort Hood Police Sgt. Kimberly Munley -- the civilian officer who confronted and disabled Hasan in a shootout -- and with an injured soldier.

"Truthfully, it was an honor just to be in their presence," he said. But, he said, "I cannot tell you how many times they reiterated to me that this is not about them."

Munley has drawn national praise for her actions. Her husband has been brought in from Fort Bragg, North Carolina, to be with her, Rossi said. In a statement Saturday, Munley's family said she had undergone a second surgery and was in good condition.

The suspect's brother, Eyad Hasan, released a statement Saturday saying the family was in a "state of shock and disbelief over this dreadful news."

He wrote, "I've known my brother Nidal to be a peaceful, loving and compassionate person who has shown great interest in the medical field and in helping others. He has never committed an act of violence and was always known to be a good, law-abiding citizen."

Eyad Hasan said the family has faith in the legal system.

An earlier statement from another family member said Hasan, a U.S.-born citizen of Palestinian descent, had been telling his family that he wanted to get out of the military but had been unsuccessful in doing so.

Rossi said Saturday that Hasan had a late November deployment date to Afghanistan. It was to have been his first overseas deployment.

Obama and first lady Michelle Obama will attend a Tuesday memorial service for the victims.