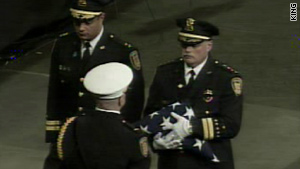 Officer Tim Brenton, who was gunned down on October 31, was laid to rest Friday in Seattle, Washington.
STORY HIGHLIGHTS
RELATED TOPICS

(CNN) -- A suspect in the shooting of a Seattle, Washington, police officer is also believed to be behind the bombing of four police cars, Seattle Assistant Police Chief Jim Pugel said at a press conference Saturday.

Christopher Monfort, 41, remained hospitalized in serious condition after being shot by officers during a confrontation Friday.

"This man, from everything that we can tell, appears to be a lone domestic terrorist," Pugel said.

Monfort was in custody at the hospital, but no charges had yet been filed, a Seattle police spokeswoman told CNN. Charges could be filed as early as Monday, she said.

Police named Monfort as a suspect in the Halloween night killing of Officer Tim Brenton, who was shot while sitting in his patrol car. A student officer was injured in the attack.

On Friday, a tipster alerted police to the owner of a Datsun 210 who covered his car shortly after the shooting, Pugel said.

While detectives walked near the residence, they came across Monfort, and after a brief questioning, Monfort pulled out a gun and aimed it at one of the officers, police said.

Monfort pulled the trigger, and when the gun didn't go off, began to run, Pugel said.

When Monfort turned around toward the police with the weapon again, the officers fired, he said.

The local sheriff's department would investigate the officer-involved shooting.

Investigators found improvised explosive devices and two weapons, including a military assault rifle, inside Monfort's apartment, Pugel said. The suspect's car had not yet been searched.

Brenton, 39, a field training officer, was reviewing details of a traffic stop with student officer Brit Sweeney Saturday night when a vehicle rolled up next to the squad car shortly after 10 p.m., authorities said

Several shots were fired into the squad car, killing Brenton and injuring Sweeney, according to police.

The shooting was the first intentional homicide of a city police officer since 1994, Seattle Mayor Greg Nickels said.

Brenton was married with two children, 11 and 8.

He served on the force for nine years, police said. His father and uncle are retired Seattle police officers.