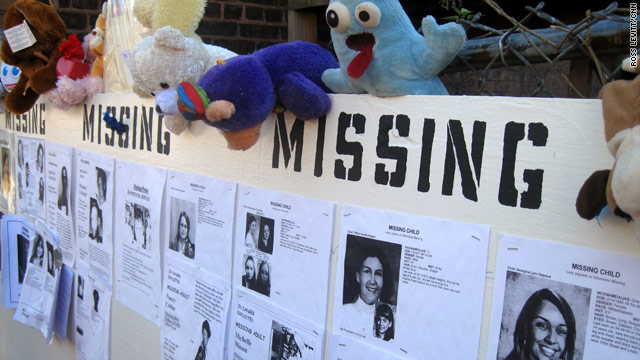 Police have discovered the bodies of 10 people and skull of an 11th victim at the home of Anthony Sowell.
STORY HIGHLIGHTS

(CNN) -- Authorities on Saturday released the names of three more victims found last week in or around the home of a registered sex offender in Cleveland, Ohio.

The Cuyahoga County Coroner's Office identified the bodies of Amelda Hunter, 47; Crystal Dozier, 38; and Michelle Mason, 45, all of Cleveland.

Anthony Sowell, who served 15 years after pleading guilty to attempted rape in a 1989 case, was arrested last week, two days after police discovered the first bodies at his home.

He faces five counts of aggravated murder, rape, felonious assault and kidnapping, police said, and was denied bond at a hearing Wednesday.

Police have discovered the bodies of 10 people and skull of an 11th victim at or near Sowell's home. Authorities have identified seven of the victims.

Remains of six victims were found inside the home. police said, and five outside. The skull was wrapped in a paper bag and stuffed into a bucket in the basement, police said.

Hunter was not reported as a missing person at the time of the discovery of the victim's bodies at Sowell's residence, according to the Cleveland Police Department. Her family reported her missing on November 3, telling police that she was last seen on or about April 18.

Mason was reported missing on October 12, 2008. She was last seen earlier that month, according to police. At the time, it was reported that Mason suffered from bipolar disorder and was not taking her prescribed medications, police said.

Sowell has been placed on a suicide watch at the request of his attorney, according to his public defender, Kathleen DeMetz.

A psychiatric evaluation has been ordered but it's unlikely to happen until after a grand jury files an indictment, she said.

Sowell is being held in a solitary cell in the Cuyahoga County jail, wearing a white paper gown, County Jail Warden Kevin McDonough told CNN. Every 10 minutes, a guard checks on him to make sure he doesn't hurt himself.

Occasionally, Sowell is allowed out of his cell under escort to shower and use a dayroom with books and magazines, but no television, McDonough said.

"He's been quiet and compliant," McDonough said. "He understands what incarceration is like."

Sowell was released from jail in 2005.

According to court documents, Sowell completed several programs while in jail, including "Living Without Violence," "Positive Personal Change" and "Cage your Rage."

In another court document filed shortly before his release and obtained by CNN, handwritten notes state Sowell "would be likely to re-offend because he still denies the rape."

Previously, the coroner's office said it had identified the bodies of Nancy Cobbs, 43; Tonia Carmichael, 52; Telacia Fortson, 31; and Tishana Culver, 31.

Police initially went to Sowell's home last week to follow up on a rape accusation. Last month, neighbors reported seeing a naked woman fall from the second floor, but no charges were filed.