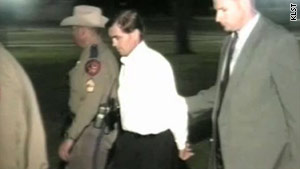 Raymond Jessop faces up to 20 years in prison after being convicted of assaulting a girl under the age of 17.
STORY HIGHLIGHTS
RELATED TOPICS

(CNN) -- A polygamist sect member arrested following last year's raid of a west Texas ranch was convicted Thursday of sexually assaulting an underage girl with whom he had entered into a "spiritual" marriage, the state's attorney general said.

Raymond Jessop was found guilty of assaulting a girl under the age of 17, and is expected to be sentenced Monday, said Jerry Strickland, a spokesman for the attorney general.

Jessop, a member of the Yearning for Zion Ranch in Eldorado, Texas, faces up to 20 years in prison.

The girl was among more than 400 children seized from the ranch in April 2008 by state child welfare workers. The children were returned after the Texas Supreme Court ruled that the state had no right to remove them and lacked evidence to show that they were in danger of abuse.

A Texas jury indicted Jessop of sexual assault of a minor along with other members of the Fundamentalist Church of Jesus Christ of Latter-day Saints.

The church -- a 10,000-member offshoot of the mainstream Mormon church -- openly practices polygamy on the ranch, as well as in Utah and Arizona.

Critics of the sect say young girls are forced into "spiritual" marriages with older men and are sexually abused. Sect members have denied that any sexual abuse takes place.